Neha Dhupia recently shared with her fans adorable pictures with husband Angad Bedi where the two are celebrating their anniversary during lockdown.

Actors Neha Dhupia and Angad got married on May 10th, 2018. They have a daughter Mehr with whom Neha Dhupia always posts adorable pictures. As soon as the post went up on Neha’s profile, fans flooded it with comments. Check out some fan comments below. 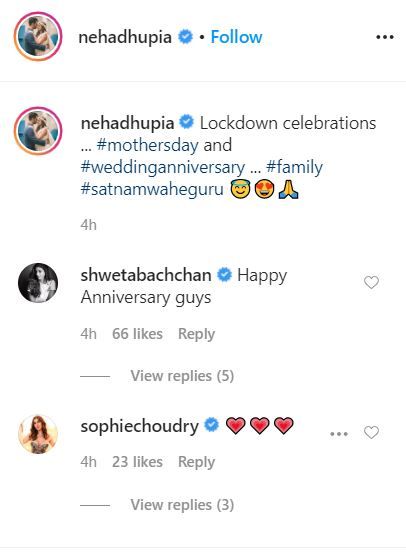 Neha Dhupia had also posted another series of pictures with husband Angad. In the post, she had written about how Angad was the love of her life, support system, great father, best friend and an annoying roommate. She further joked about how it is like having five boyfriends and ended the note by saying “It’s my choice” referring to the Roadies controversy and her statement of girls being allowed to have one boyfriend or five. Check out the post below.

The couple never shies away from giving their relationship goals. They are always seen posting adorable pictures together. Check out some of those pictures below.

What is next for Neha Dhupia and Angad Bedi on the work front?

On the work front, before the lockdown, Neha Dhupia was seen as a judge on the reality television show, Roadies. The filming of the show was halted because of the lockdown, but Neha Dhupia is expected to be seen in the show again after the lockdown. Angad, on the other hand, was last seen in the film The Zoya Factor and a television show The Verdict – State vs Nanavati. The actor will be seen next in Gunjan Saxena: The Kargil Girl.
Read | Kareena Kapoor Khan To Neha Dhupia, Bollywood Moms Who Broke All Stereotypes

PEOPLE HAVE PLEDGED SO FAR
LATEST NEWS
View all
2 hours ago
Sidharth Shukla has new way of staying cool and it is too much fun; watch here
16 hours ago
Here's how Praveen Kumar Sobti bagged the role of Bheem in 'Mahabharat'; Read
22 hours ago
JD Majethia on resuming shooting, says responsibility lies with broadcasters & producers
20 hours ago
Mayaur Verma posts pictures of police complaint against Devoleena's fans for death threat
3 hours ago
Hina Khan flaunts her abs in yellow outfit; says 'Don’t wish for good body, work for it'