Neha Kakkar and Aditya Narayan were making the headlines after the marriage rumours, Udit Narayan put the rumours to rest, but Aditya had something to say. Read

Aditya Narayan thinks that his ‘Jodi’ (pairing) with singer Neha Kakkar is still cute even after father, Udit Narayan recently slashed the marriage rumours as a 'TRP stint'. Aditya Narayan and Neha Kakkar’s marriage rumours came in strong after Karthik Aaryan had revealed in a shocking episode that the two are engaged to be married. After several reports and Tony Kakkar’s IGTV video, netizens speculated that the rumoured couple is going to be married on February 14, 2020. However, Udit Narayan revealed that the entire act is a publicity stunt and none of it is true.

However, the post that Aditya Narayan shared on his Instagram story says, ‘Kuch Bhi Kaho Jodi Badi Cute Hai," which means, " no matter what, the pairing is still cute."  Aditya Narayan reposted a story which was originally shared by the makers of the show Indian Idol 11. The original post sees Neha-Aditya, in a cuddly pose amidst pink edits, which wishes the followers a happy hug day. It is also captioned with sweet words and the hashtag #nehaditya. The post revealed that the upcoming episodes will include the wedding revelries over the weekend.

Here is what the makers of the show shared:

Here is what Aditya Narayan wrote on the reposted story: 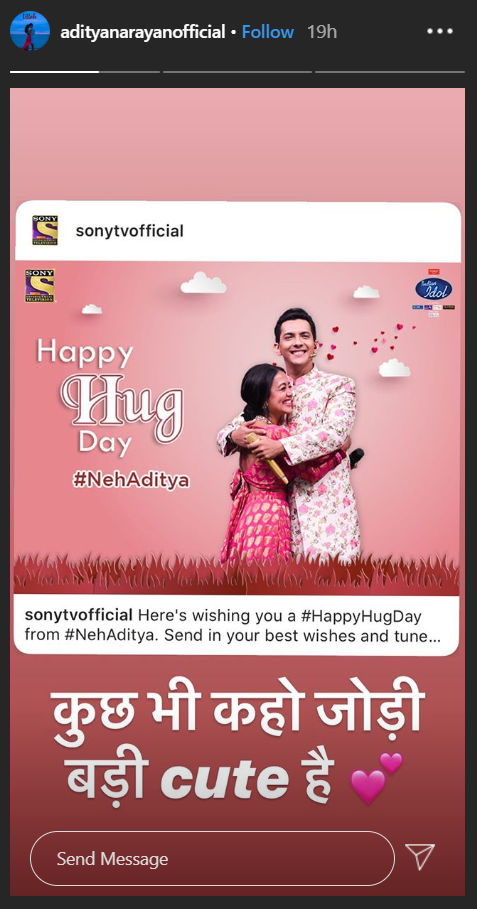 Aditya Narayan’s father had earlier said that he suspects that these link-up and marriage rumours of Aditya and Neha Kakkar are just to boost the TRPs of Indian Idol, where Aditya is the host and Neha Kakkar is the judge. He had also said that he wished for the rumours to be true and that Neha Kakkar is a wonderful girl, and they would love to have her as their daughter-in-law. He has also stated that Aditya is his only son and that he is waiting for him to get married. He went on to say that if these wedding rumours are true, his wife and he would be the happiest parents in the world. But apparently Aditya has not shared the news of his marriage with them yet.