On October 12, popular TV actor Parth Samthaan shared a few pictures, in which he gave the glimpses of his first love while posing with a smiling face.

On October 12, popular TV actor Parth Samthaan took to his social media handle and shared a couple of pictures with his "first love". Interestingly, in the slideshow, Parth was seen posing with a smiling face while having a scoop of dessert. In the pictures, the actor was seen sporting a casual look in a white round-neck t-shirt. He also opted for black sunglasses. Scroll down to take a look.

READ | Who Is Parth Samthaan Dating? Disha Patani To Erica Fernandes; Alleged Linkups Of The Star

Within a day, the Kaisi Yeh Yaariaan actor's post managed to garner more than 415k double-taps on the photo-sharing platform. Meanwhile, Splitsvilla 7 winner Scarlett M Rose took to the comments section and wrote, "I miss you & our food See you soon", along with a red-heart emoticon.

On the other side, many from his 4.5M Instagram followers flooded the comments box with praises. A fan wrote. "He is such a foodie" while another asserted, "Mann your smile is so peaceful to look at". A section of fans congratulated the actor for his 700th post. 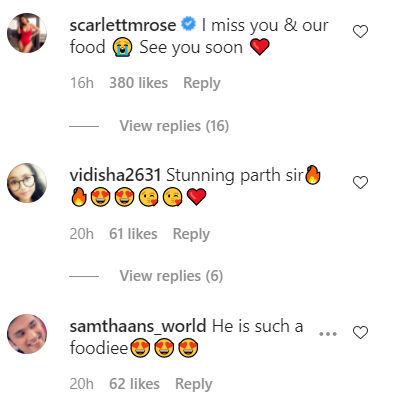 Interestingly, the 29-year-old actor is a moderate social media user. However, he keeps his fans updated with his whereabouts. In a recent post, Parth stole the hearts of his female fans as he was seen sporting a shirtless look in the photo. While adding a caption to it, he asked, "Plan of action for the week??".

Joining the fun banter in the comments box, Scarlett Rose and his Kasautii Zindagii Kay co-star Erica Fernandes gave a few choices. Scarlett asked if Parth is planning to have an apple while Erica laughed it off while saying that Parth might plan to visit his favourite place.

Recently, Samthaan also bid adieu to Star Plus' Kasautii Zindagii Kay, which went off-air. In a lengthy caption, he wrote, "One beautiful journey has ended! Today being the last of Kasautii, all I take along with me are Memories. Can’t thank enough to the team of Balaji Telefilms and of course Ekta Kapoor ma’am for giving me this iconic character to play". Talking about the professional front, he will soon gear up for his digital debut, Main Hero Boll Raha Hu.