Qubool Hai actor Rishabh Sinha, on Thursday, January 28, took to Instagram to praise of the masterpiece created by famous Dutch post-impressionist painter Vincent Van Gogh. While sharing the details about his painting Starry Night, Rishabh added how the iconic painter created the art piece during his stay at the asylum of Saint-Paul-de-Mausole. Talking about Vincent Van Gogh’s health, Rishabh detailed how the painter lived in a hospital during the last few years of his life.

Vincent van Gogh painted Starry Night in 1889 during his stay at the asylum of Saint-Paul-de-Mausole near Saint-Rémy-de-Provence. Van Gogh lived well in the hospital; he was allowed more freedoms than any of the other patients. If attended, he could leave the hospital grounds; he was allowed to paint, read, and withdraw into his own room. He was even given a studio.

The panting shared by the actor features a painter creating an artwork in the night. The landscape is lit up with the shiny light released by the stars and a busy neighbourhood. As he appreciated Vincent’s work, Rishabh shared how the artist suffered from ‘occasional relapse into paranoia and fits’. “While he suffered from the occasional relapse into paranoia and fits - officially he had been diagnosed with epileptic fits - it seemed his mental health was recovering. Unfortunately, he relapsed”, said Rishabh.

For the unversed, Van Gogh shot himself at age 37 back in 1890. The shooting is speculated to have taken place in the wheat field in which he had been painting. The painter transitioned 30 hours after the incident. Talking about the same, Rishabh opined how the demons of depression accentuated the ‘thoughts of suicide’ in the mind of the painter.

He began to suffer hallucination and have thoughts of suicide as he plunged into depression. Accordingly, there was a tonal shift in his work. He returned to incorporating the darker colors from the beginning of his career and Starry Night is a wonderful example of that shift.

ALSO READ| Lillete Dubey Joins The Cast Of 'Qubool Hai 2.0' As 'Nilofer' For A 10-episodes Series

After the post was shared by the actor, it turned out to be a message of awakening for many. A few fans were also seen sharing their views about the tragic life of the painter. Take a look at it: 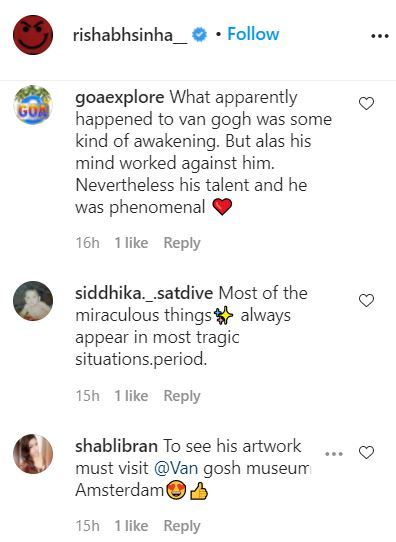