Fans absolutely adore Sargun Mehta and Ravi Dubey's loving relationship. The two never hesitate to show their affection for each other even when on camera. Recently, Ravi Dubey started a live video on Instagram to talk with his fans during the quarantine. However, Sargun Mehta walked into the frame and made an unexpected guest appearance, as she was unaware of the ongoing live session. Sargun Mehta then affectionately hugged Ravi Dubey and fans truly adored this impromptu romance between the two actors.

After their adorable moment on the Instagram live stream, Ravi Dubey snipped the segment and shared it in a post. In the caption for the video, Ravi Dubey revealed that the whole moment was unscripted as Sargun Mehta did not even realise that he was live on Instagram. In the video, Sargun Mehta suddenly pops into the frame and gives her husband, Ravi Dubey, a warm and loving hug.
Also Read | Sargun Mehta shares a throwback picture from her debut film 'Angrej', See post here

Ravi Looks completely surprised by her sudden appearance, however, he continues to hug her and even tells her that he loves her. Ravi then tells Sargun Mehta that he is on an Instagram live stream. After realising she is live, Sargun Mehta quickly runs off-screen, allowing Ravi to continue his live session with his fans.

Fans truly adored this romantic moment and many even flooded the comments section of the video with hearts and praises. Many fans even deemed their relationship to be "couple goals". Check out some of the comments down below. 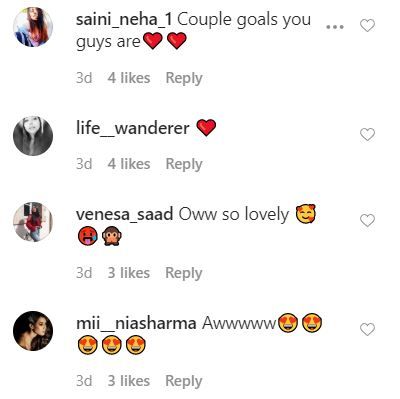 Some other romantic "guest" appearances

Back in April, Viral Kholi had a live session of his own, when his wife, Anushka Sharma, helped him out on camera. Anushka Sharma switched on the lights for Virat's live session, and the cricketer even thanked his wife for her impromptu help. Similarly, Nick Jonas made a surprise appearance on Priyanka Chopra's live session during quarantine.

PEOPLE HAVE PLEDGED SO FAR
LATEST NEWS
View all
4 hours ago
When bffs surbhi jyoti & surbhi chandna aced 'sassy bride look' with glares
2 hours ago
Mouni roy looks every bit gorgeous as she flaunts her toned abs after dance practice
3 hours ago
Mahabharat written update may 27: duryodhan's oath to destroy krishna
22 mins ago
Hina khan swears by this mantra for sweating it out in the gym
2 hours ago
Bigg boss 13 fame celebrity shefali jariwala's father-in-law passes away, actor flies home