On Monday, February 22, television actor Sidharth Shukla left fans swooning over his new slow-motion video. Here's everything that you need to know about it.

On Monday, February 22, television actor Sidharth Shukla left fans swooning over his new slow-motion video. Taking to Instagram, the Humpty Sharma Ki Dulhania actor flaunted his chiselled physique in a new poolside clip. Upon seeing the post, fans of the actor filled his comment section with heaps of praises and flirtatious comments.

Sidharth Shukla dives in a pool

In the short clip shared by him, Sidharth can be seen donning a black short as he prepares himself to dive into the swimming pool. Jumping inside in slow motion, he relaxingly swims in the water. In the end, while rising up, the Balika Vadhu star adjusts his hair and showcases his muscular biceps. He winks at the camera and gives a thumbs up to all his Instagram followers before bidding adieu featuring a contagious smile.

Going by the video it appears that the actor had a gala time while chilling at the pool. Talking about the same, he wrote, “Sometimes you just gotta chill” alongside the video. Check out the new video below:

ALSO READ| Sidharth Shukla Weekly Roundup: A Look At What The Actor Was Up To This Week

As soon as the clip surfaced online, it created a massive buzz amongst Sidharth Shukla’s followers. While some complimented the chiselled look of the actor, many others just couldn’t keep calm. From flirty to quirky, Sidharth Shukla’s comment section is filled with heaps of praises. Here’s taking a quick look at how fans are reacting online: 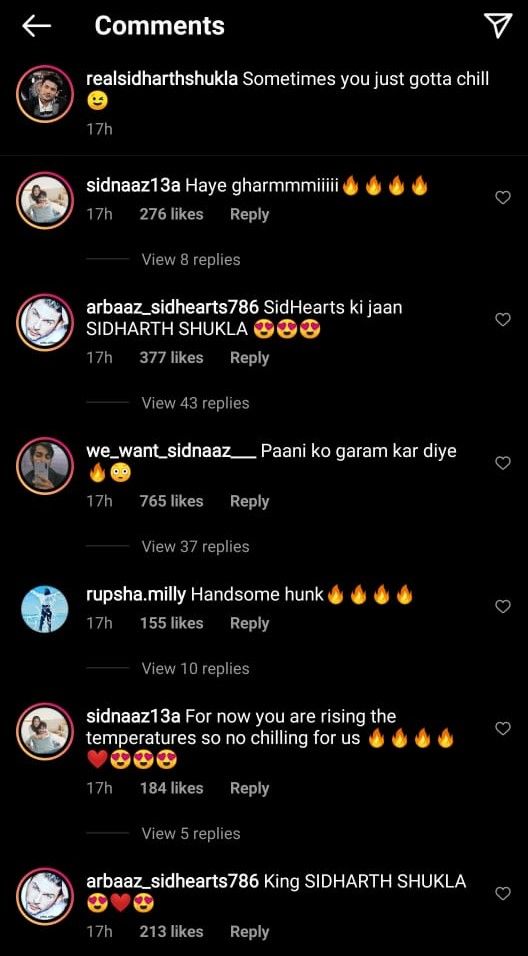 Previously, Sidharth Shukla shared an advertisement video alongside Shehnaaz Gill on his official Instagram profile. The video was released on Valentine’s day and their banter did not fail to garner the attention of the #SidNaz fans. Take a quick look at the video here:

Meanwhile, on the professional front, fans are eagerly waiting to watch Sidharth Shukla and Shehnaaz Gill’s chemistry in an upcoming track titled Habit. Crooned by acclaimed singer Shreya Goshal, Habit has already garnered much attention from the #SidNaz fan army. Previously, they teamed up for the romantic track Shona Shona and Bhula Dunga as well. Of which Bhula Dunga has recorded 100 million views in the month of January, this year.