Sidharth Shukla shared a picture with Tony Kakkar and Shehnaaz Gill to announce his new project. Read on to know what caught the fans' attention in the photo

Sidharth Shukla and Shehnaaz Gill have been a rumoured couple for quite some time now since they appeared in a popular reality show. While Sidharth Shukla was announced the winner of that season of the show, what caught the fans' attention was the chemistry between the two actors. Even after their reality show stint ended, the two actors were seen occasionally commenting on each other's Instagram pictures and their fans even address them as #Sidnaaz. Read on to know about Sidharth Shukla's Instagram post featuring Shehnaaz Gill and Tony Kakkar.

Sidharth Shukla and Shehnaaz Gill have worked in quite a few projects together. In a recent Instagram post, Sidharth Shukla shared a photo with Shehnaaz Gill and singer Tony Kakkar, while captioning the picture, "Coming soon". He even posted a heart with the caption and got his fans excited about his upcoming project and the teaser picture that he shared. What caught the fans' attention more was the way he was looking at Shehnaaz in the photo. While Sidharth looked dapper in a pink t-shirt paired with a blue shirt, Shehnaaz carried off a red dress with a matching pair of flats.

Sidharth and Shehnaaz were recently in Chandigarh shooting for a music video. The Balika Vadhu actor shared a few snippets from his Punjab trip where he could be seen posing amidst a mustard field and another video where he is seen riding a bullock cart. His video even got a comment from Shehnaaz saying, "Buraaahhhhh". The rumoured couple even featured together in Darshan Raval's much popular song Bhula Dunga which was released early this year. 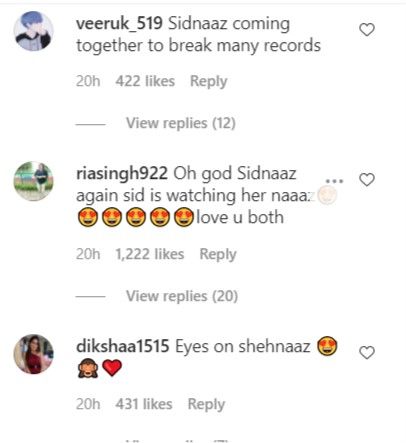 #Sidnaaz fans couldn't control their excitement seeing the picture of their two favourite actors together and commented with heart emojis and heart-eyes emojis. A fan commented saying that Sidnaaz is all set to break many records while another follower adored the fact that Sidharth is looking at her instead of the camera.