Sidharth Shukla Shares A Stunning Picture Of Himself And Fans Call Him 'King', See Pic

Amidst the Coronavirus outbreak, actors have been encouraging their fans to stay at home. During this time, social media has played an important role as the actors are able to reach out to their fans. Celebrities have taken it upon themselves to keep their fans entertained. Similarly, Bigg Boss 13 winner Sidharth Shukla recently shared a stunning picture of himself and the fans say 'Sid is King'. Sidharth Shukla was already a popular face in the television world.

Here is a look at the picture that Sidharth Shukla posted

The stunning picture immediately captured everyone's attention. In no time, the fans flooded the comments section with compliments for Sidharth Shukla. One of the fans also commented on the picture saying "â¤ï¸ðŸ˜â¤ï¸ðŸ˜ YOU ARE THE ONE who MATTERS to US. âœ¨". Here is a look at some of the comments on Sidharth Shukla's recent picture. 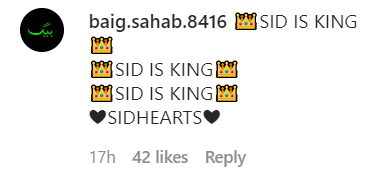 Sidharth Shukla was last seen in the music video with Bigg Boss 13 former contestant Shehnaaz Gill. The song is titled as Bhula Dunga. The video received a fantastic response from the audience. The music video of Bhula Dunga has crossed about 57 million views on YouTube.

Also Read: Sidharth Shukla Jokes About 'running Out Of Pictures' As He Posts Two Similar Photos