Bigg Boss 13 fame Sidharth Shukla was recently spotted by a shutterbug as he headed out to run some errands and indulged in fun banter with the paparazzi, watch

Bigg Boss 13 fame Sidharth Shukla was recently spotted by one of the paparazzis as he headed out to run some errands. The actor also indulged in fun banter with the paparazzi and it is sure it to melt your heart. Fans are sure going to go gaga on seeing this adorable video.

In the video, Sidharth can be seen getting into his car, when a paparazzi soon stops him and has a fun conversation with the actor. The paparazzi can be heard telling that actor that he misses him and will meet him soon. He later goes on to ask Sidharth about when will he be seen together with Shehnaaz Gill. The actor smiles and responds saying 'when she has the time', that is when they will be seen. The paparazzi once again asks him the same question and he responds saying 'very soon'.

Along with the video, the paparazzi also wrote a wrote quirky caption. The caption read as, “Told you this was a bomber. BOOM ðŸ”¥ðŸ”¥ðŸ”¥ #sidharthshukla #paptalk”. Take a look at the video below.

Fans were so excited seeing this video that could not stop themselves from commenting on the post. The post received several likes and positive comments from fans. Some of the users commented about Sidharth’s blush when the pap took Shehnaaz’s name, while some were all gaga over his looks.

One of the users wrote, “abe yaaar ....koi to rok lo inka blush” while the other one wrote, “Sirf #SidharthShukla ki baat honi Chaiye aur kisi ki nhi”. Take a look at a few comments below. 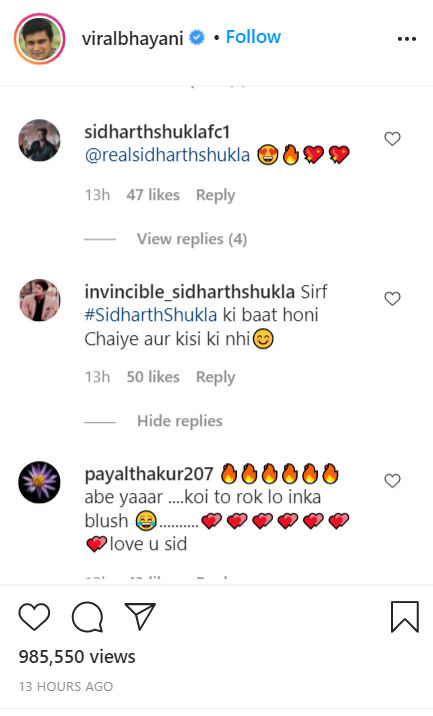 Sidharth Shukla has been a part of the television industry for quite a long time now and has also managed to impress fans and audiences with his charming personality and acting persona. And now, he has been wooing audiences with his latest music video. Recently, Sidharth Shukla was seen in Dil Ko Karaar Aaya's music video and had taken the internet by storm. The actor has been seen in the film, romancing with Neha Sharma. After the song's publication, fans have been all gaga over it, even taking the song with #DilKoKaraarAaya to the microblogging site. Watch the video below.

Also read | Sidharth Shukla Steps Out To Buy Rakhi, Indulges In A Fun Banter With Paparazzi