Supermodel of the Year is currently an ongoing reality-based modelling show. And the recent promo shows the judges upset about the contestant. Read here.

Supermodel of the Year is currently an ongoing reality-based modelling show. The reality show is currently airing on MTV India and it shows aspiring models from across cities in India battling it out and win the coveted title of Supermodel Of The Year. The show's finale episode is all set to air this weekend.

The makers of the show recently released its promo from the grand finale on their Instagram handle and seem like the judges are not very happy with the performance. The promo shows Milind Soman asking Malaika Arora and Masaba Gupta about the shoot and they responded as if they weren't too pleased with the performance.

The makers did not reveal the name of the finalists and tried to maintain the hype among fans. And seems like they have not left fans clueless as fans already know who is going to be the winner of Supermodel Of The Year. They go on to comment about how biased the show is towards the contestant.

Fans feel like the judges of the show are biased towards Priya Singh and they think that they are trying to help her win the show. As one of the users wrote, “They don’t want Manila to win”. While the other one wrote, “Definitely not Priya”. Check out a few comments from fans who have gone on to comment in the comments section below. 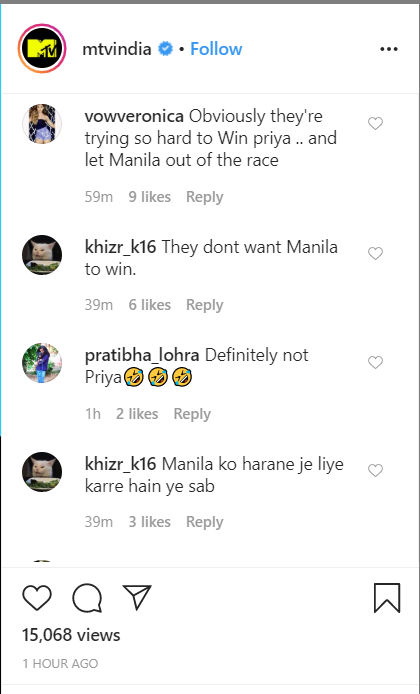 The Supermodel of the Year began with 10 contestants and are currently left with two contestants for the win. The two contestants who are trying hard to win the title are Manila and Priya. Fans have already guessed the winner. Who do you think will win the show? Reply in the comment section below.

Also read | Supermodel Of The Year: Models Grace The Stage On Beats Of Raja Kumari In Finale