Varun Dhawan recently took to social media to ask his fans who was a pro at attempting a hook-step from his upcoming film, 'Street Dancer 3D'. Check it out.

Varun Dhawan is currently gearing up for the release of his upcoming dance flick, Street Dancer 3D opposite Shraddha Kapoor. The film directed by Remo D’Souza has been stealing the headlines ever since it was announced and now with the release of the foot-tapping music from the film, the audience cannot wait for the film to hit theatres soon.

Varun Dhawan asks “Who did it better?”

Recently, Varun Dhawan took to social media to ask his fans a special question. He shared a meme in which the first picture had a snippet from the song Garmi. The snippet features Nora Fatehi doing the steps of Garmi from Street Dancer 3D. In the picture below, Varun Dhawan shared a snippet of him doing the same step during one of the promotional rounds. Varun Dhawan then asked his fans to choose who did it better. 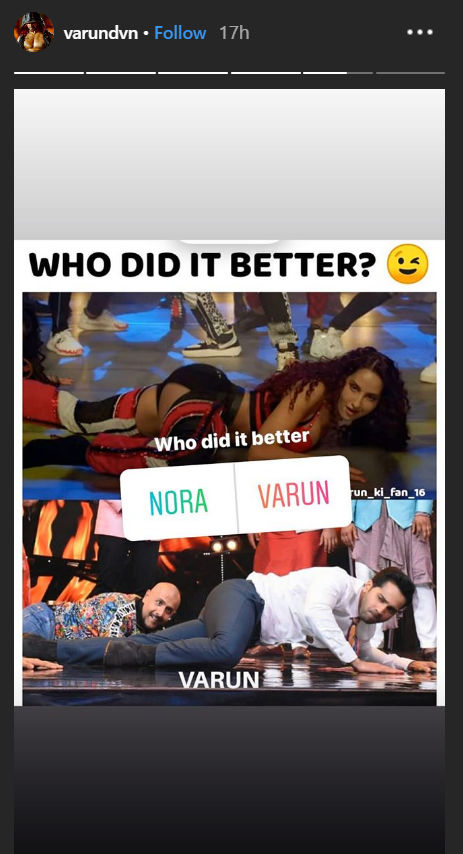 In a previous interview, Varun Dhawan revealed that he had to learn all the steps for Street Dancer 3D all alone. They had to learn the steps all by themselves by practising with professional dancers and without making many mistakes. The Street Dancer 3D actor also said that he would practice for seven hours long and weight train for about 60 to 90 minutes to target his legs as he had to do stunts and also learn professional dance moves. Varun Dhawan said that this was one of the biggest challenges he faced during the shoot of Street Dancer 3D.

Street Dancer 3D will be the second time Varun Dhawan will be reuniting with Shraddha Kapoor. After ABCD2 fans are eagerly awaiting to see how their on-screen chemistry unveils on the screen this time. It is all set to release on January 24, 2020.