Actor Jennifer Winget took to Instagram on Friday, January 15, 2021, to announce the second season of her web show titled Code M. On the occasion of Army Day, the actor went on to share a teaser of her upcoming show and also penned a note revealing details about the same. In the show, Jennifer Winget plays the lead role of Major Monica Mehra in the much-acclaimed season one and will soon begin shooting for its second season. As soon as she made the announcement, fans have been going gaga all over the post.

Taking to her Instagram handle, Jennifer Winget shared a video message where she went on to reveal details about the upcoming show. The video begins with a parade, followed by action scenes and more. Seconds later, Jennifer makes an entry in her army uniform. In the video, she also went on to talk about the hard work of the Indian army and how they are ready to fight under any circumstances without caring for their family. She also goes on to salute all the people in the army. Towards the end of the video, the actor also said that she has returned to reprise her role as Major Monica Mehra on Code M season two.

Along with the video, the actor also penned a note revealing details about the same. She wrote, “Major Monica Mehra is back and her priorities haven’t changed!! It’s always going to be “country above family” for her, kyunki ek soldier ke liye desh hi sab kuch hota hai aur woh kisike liye nahi jhukta hai”.

She also said, “Get ready to meet Major Monica Mehra in #CodeM Season 2 on @altbalaji and @zee5premium. This #ArmyDay, we salute the brave souls who fought for our country”. She concluded, “#CodeM Season 2 Filming Begins soon”. Take a look at the post below.

As soon as Jennifer Winget shared the video online, fans expressed excitement in the comments section. Some of the users went on to praise the actor and the show for its storyline, while some commented saying that they are waiting for the show. One of the users wrote, “One of the best series I have seen... we wish to see you in movies”. While the other one said, “so so excited”. Take a look at a few comments below. 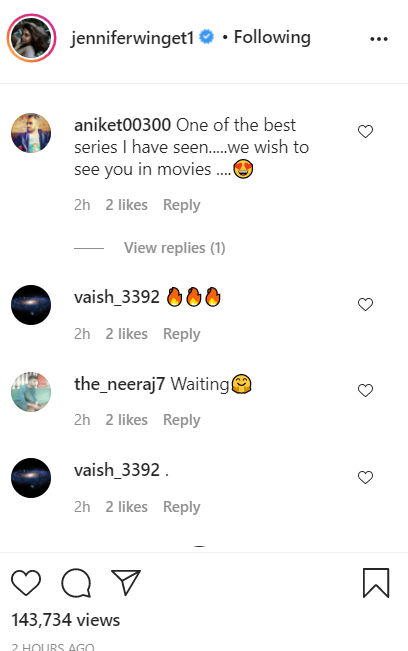