'Mirzapur 2' Makers Drop A Big Surprise For Fans, Know What It Is Here

'Mirzapur 2' is all set to release on October 23, 2020, on Amazon Prime Video. The makers of Mirzapur recently disclosed a huge surprise for the fans

Search 'Mirzapur' on the app or simply click here to watch: https://t.co/d0nf67jUP9 pic.twitter.com/YqkoraWLhs 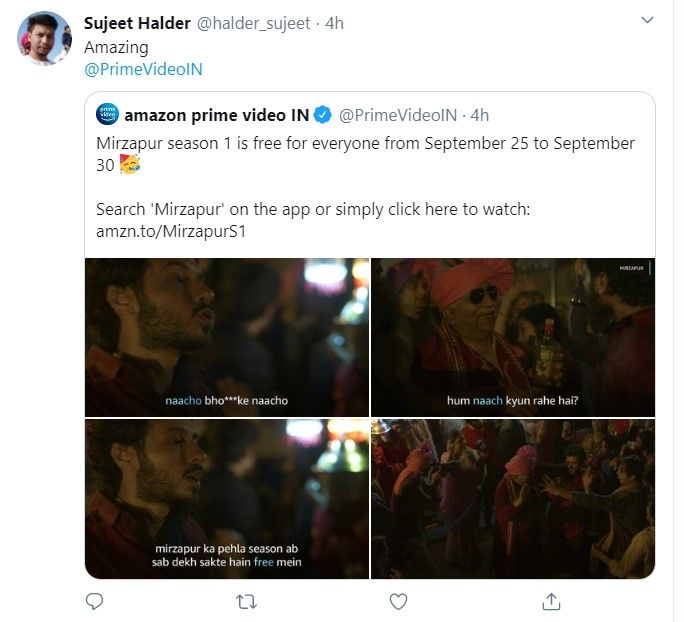 All about the plot of Mirzapur 2

Mirzapur is an action thriller web series that revolves around the life of mafia dons, their rivalry with each other in the Purvanchal region of Uttar Pradesh. Directed by Karan Anshuman and Gurmmeet Singh, the first season consisted of 9 episodes in which an innocent brother duo, Guddu & Bablu end up becoming a vital part of one of the  prominent mafia family's. With all the thrill in the story, one brother ends up dead while another loses his wife. The antagonist Munna kills Guddu’s brother Bablu and wife Sweety in the end and now in the upcoming season of Mirzapur, the story will take off from where it left. Now, Guddu along with Golu, Sweety's sister will plan a revenge against Munna and his father, Kaleen. Guddu faces a threat from Rati Shankar’s son as he killed his father in season 1. Take a look at how Amazon Prime announced the release date of Mirzapur 2.

The cast of Mirzapur 2

The cast of Mirzapur remains almost the same as that of season 1. The earlier cast included Ali Fazal as Guddu Pandit, Pankaj Tripathi as Kaleen Bhaiya, Vikrant Massey as Bablu Pandit, Divyendu Sharma as Munna, Shweta Tripathi as Golu, Shriya Pilgaonkar as Sweety, Rasika Duggal as Beena Tripathi, Kulbhushan Kharbanda as Satyanand Tripathi in the lead and other supporting actors.

With the death of Bablu, Sweety and Rati Shankar Shukla, except for them, the cast is expected to remain the same with the addition of some fresh new characters. Mirzapur 2 release time is expected to be at midnight IST (as per Amazon Prime India) on the date of October 23. The fans are now eagerly waiting for Mirzapur 2 to see their favourite characters in action.