Anindita Bose was last seen in Paatal Lok as Chanda the con woman. However the actors Instagram page brings to light how talented she is in other fields as well

Anandita Bose is an actor who was recently seen in a web series Paatal Lok. She has been garnering praises for her portrayal of a con artist known as Chanda in the show. However, even a cursory glance at her Instagram profile page shows that she has more than just acting skills. The white and black doodles made by the actors are as beautiful as the actor herself. Read on to know details about it.

The doodles made by Anandita Bose have several themes to them. The actor seems to feel very strongly about body shaming and self-love as many of her doodles bring that out. Moreover, the actor has posted doodles where she has shows women dreaming, striving and striking their goals.

'Scoob' Cast's Net Worth Is No Mystery At All; Check Details Inside

While many of the doodles are about women empowerment, there are several posts which bring out her love for nature. The actor has doodles many times, animals, trees and other natural elements in her posts. Moreover, in some of her doodles, one can see that she tries to establish a bond between humans and animals as well as nature.

All the doodles seem to tell a story which creeps out from her innovative mind. Apart from acting and doodling, the actor makes sure that she captions her posts well. Anandita Bose puts interesting bits of writing and quotes in an attempt to explain the thought behind her doodle.

However, the actor has not limited her self to black and white doodles. From time to time, she has posted pictures of her doodles where she has tried her hand at filling in those doodles with colours. Check out some of the doodles made by the actor below.

As soon as fans saw the posts by the actor and found out how talented she is, they flooded the doodles with their reactions. Fans did not shy away from expressing how awestruck they were after seeing the doodles by the actor. Actors like Mandira Bedi also commented on the posts and appreciated Anindita Bose. Check out some of the comments below. 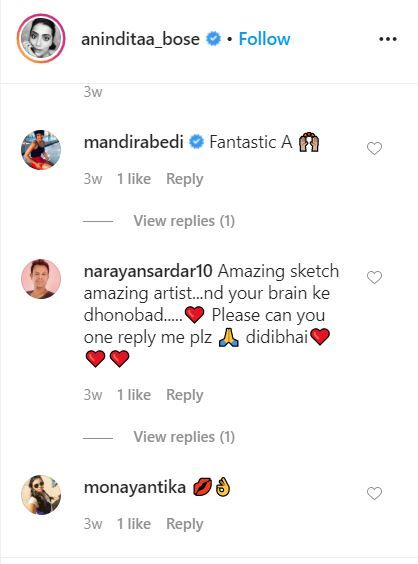 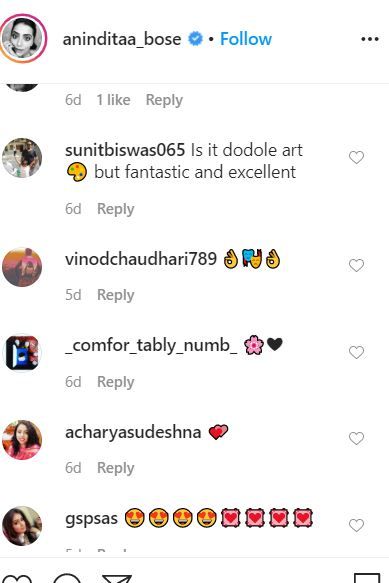 On the work front, Anindita Bose is a Bengali television and film actor. She was last seen in Paatal Lok. The actor was also seen in a Bengali language romantic film Love Aaj Kal Porshu. The movie received a mixed response from fans and critics. Her upcoming projects are not known currently, as the actor has kept them under wraps.