The Boys season 3 filming date is revealed by creator Eric Kripke. Title of the first episode is also out which hints at Avengers parody characters. Know more.

The Boys has made its way to one of the top shows on OTT platforms. Season one and the recently released season two has garnered immense appreciation from the audiences. The show has been renewed for a third instalment. Now the shooting date and first episode name are out.

Also Read | 'The Boys' Season 3 To Mark The Return Of Popular Characters From Previous Seasons?

The Boys developer Eric Kripke took to his Twitter handle to share an update on season three. He tweeted that The Boys season 3 will commence shooting in early 2021, which is expected to be in February. He also shared a picture which reveals the name of the first episode. It is titled as Payback and is penned by Craig Rosenberg. 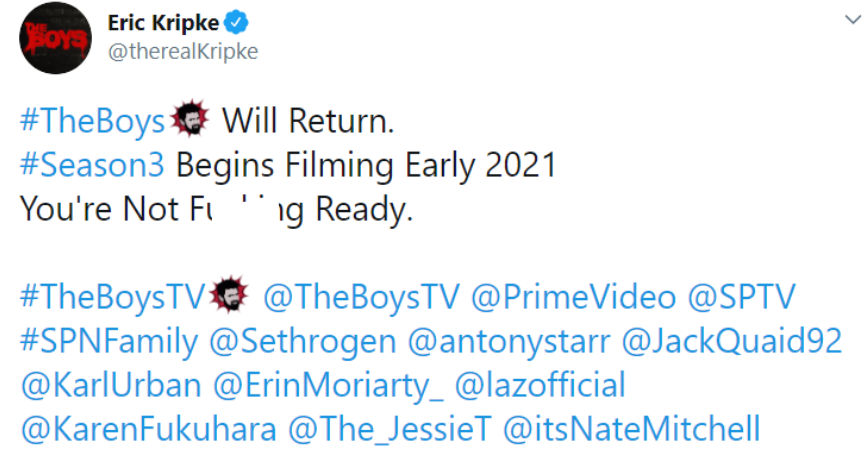 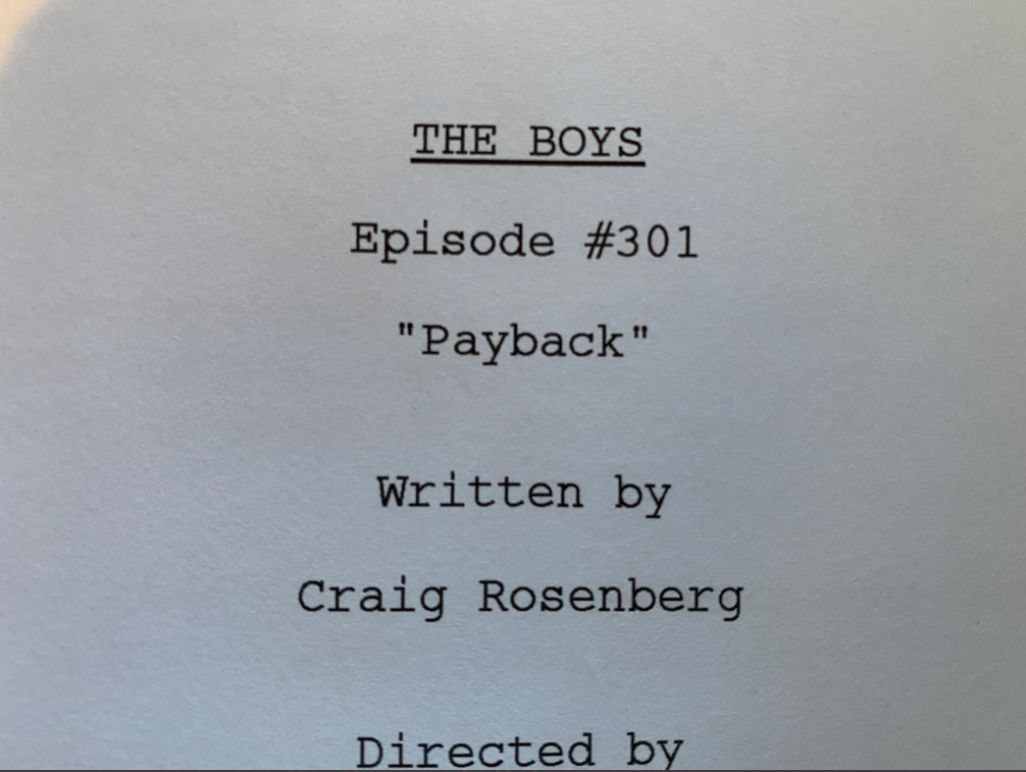 The Boys is based on Garth Ennis and Darick Robertson’s comics of the same name. The season three episode one title Payback refers to a group of supes from the book. They are a direct parody of Marvel’s Avengers. The team is led by Soldier Boy, which will be portrayed by Supernatural actor Jensen Ackles.

The other members of Payback include several rip-offs characters of Earth’s Highest Heroes.  An Iron Man / Batman-like character Ted-Knight, a Scarlet Witch equivalent Crimson Countess, Swatto a parody of The Wasp, Mind Droid who is similar to The Vision and Eagle the Archer resembles Hawkeye. A few of them were seen or mentioned in the previous seasons.

The Boys season 3 will show the history of Vought through Jensen Ackles’ Soldier Boy. The Payback is speculated to be the "Seven before the Seven". In the comic book, the team also includes Stormfront, essayed by Aya Cash in season two. Spoiler Alert!

However, she will not be in season three as the character died at the end of the latest season. Soldier Boys is said to be connected with Vought since World War II. His interaction with Homelander, played by Anthony Starr, is likely to create a riff, as both are a strong opposition to each other.

Also Read | 'The Boys' Creator Says He Already Regrets A Major Death From Season 2; Know Which One?

The Boys season 3 will mark the return of Karl Urban, Jack Quaid, Laz Alonsa and Tomer Capon as they reprise their role of normal humans out to hunt the supes and destroy Vought. Anthony Starr, Dominique McElligott, Erin Moriarty, Jessie T. Usher, Chace Crawford, Nathan Mitchell also make a comeback in their superhero avatars. It will also feature Giancarlo Esposito, Colby Minifie, Jensen Ackles and Claudia Doumit with others. A spinoff series is also in development at Amazon Studios.

WE RECOMMEND
6 days ago
'The Boys' creator teases Jensen Ackles in a villainous role as Soldier Boy for season 3?
5 days ago
'The Boys' season 3 to mark the return of popular characters from previous seasons?
1 week ago
The Boys season 3 could have more of Love Sausage vs MM, hints creator Eric Kripke
1 month ago
'Supernatural' Season 15: Makers release photo preview of episode 14 'Last Holiday'
1 week ago
Jared Padalecki shares heartfelt message for SPN family as 'Supernatural' comes to an end