Cats Try To Get Stuck Pencil Out, Netizens Laud Their 'pawblem' Solving Skills

A hilarious video clip features two cats making some serious efforts at getting a pencil out from beneath a door. Posted on Reddit, it is doing going viral.

A hilarious video clip features two cats making some serious efforts at getting a pencil out from beneath a door. Posted on Reddit by a page named 'animals being bros’, the 45 seconds long video shows the two cat “brothers” trying to figure out how to get the black coloured pencil out. In the caption, the user mentioned that the “boys” were working on a project together, that was to get the pencil out, that "they got stuck”.

The video shows the pet felines taking turns to figure out how to get the pencils out. The cats, both grey-and-white furred, initially stand next to a door. As the video progresses, they are seen concentrating intensely on the task, trying all antiques in the process. The cat's paw at the pencil from different positions and angles, however, are unsuccessful.

Since shared on Reddit, this post has accumulated over 9,000 upvotes and the numbers are increasing steadily. The clip of the two cats ‘working together’ has left many flabbergasted with many asking for a “project update”. To this, the original poster responded, “They walked off the job! Went on a ‘lunch break’ & never came back”. Yet another comment read," m unsure why, but this tickles me to no end. I've just been watching them for a few minutes now."

Read: Girl Makes PowerPoint Presentation To Convince Her Parents For A Pet Cat 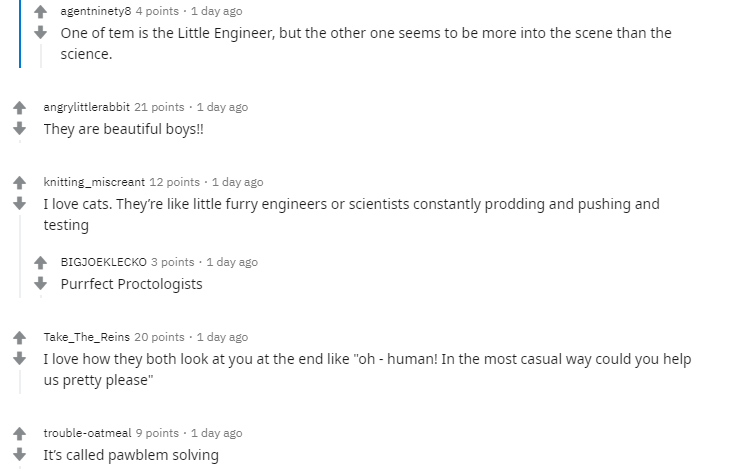 Another cat made headlines recently, after his hooman accidentally dyed him yellow. The netizens considered it as Pokemon's character ‘Pikachu’. Reportedly, the cat's parent Thammapa Supama from Thailand had to dye the cat as she was bothered that it had developed a fungal infection on one of its limbs. After Thammapa Supama medicated the cat with a turmeric scrub, the white cat came out as a yellow one. And this is how her cat turned into Pikachu.