Is That A Man Or...?: Optical Illusion Of A Figure In Snowy Forest Leaves Netizens Baffled

An optical illusion has led netizens baffled after it appears to show either a figure walking into the woods or a black poodle running out of the forest. 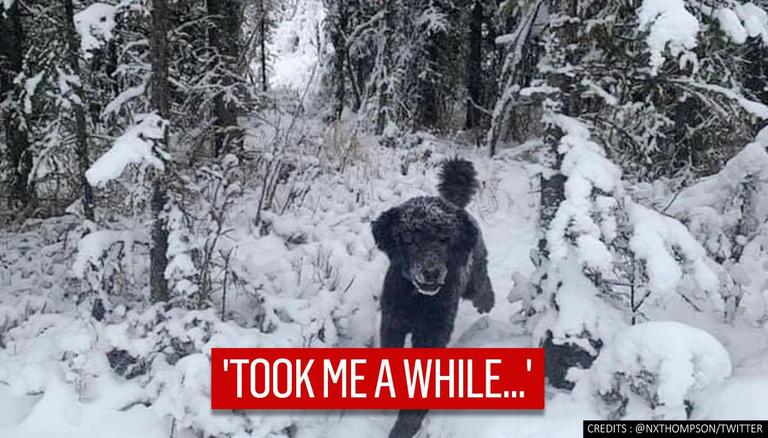 An optical illusion has led netizens baffled as people see a particular picture differently in their first look. In the photo shared by a Twitter user, the figure is seen amid a snow-covered stretch surrounded by huge trees. At a first glance, it seems that a huge man is running towards the woods. However, on a closer inspection, netizens spotted that it’s not a human, but a dog covered with snow. What did you see? A figure walking into the woods or a black poodle running out of the forest?

The picture has stunned thousands of people as they debated what they saw. The image, taken in an unknown location, has been widely circulated by users around the globe and people were split with many believing it shows a figure heading into the woods wearing a backpack. But it was the dog’s tail that appeared at first glance to be the back of a person’s head.

An optical illusion for tonight. First you see a man running into the snow ... and then ... pic.twitter.com/R9Lj1mlR5X

READ: Viral Memes Memes Of The Week; From Myntra Logo To Dogecoin Inflation

The white flakes on the dog’s black coat got several people confused who thought it to be a man. Since shared, many commented on the image, saying that the image blew their mind, while others said they seriously thought it was a man or some even thought it was a bear. One user wrote, "I had to take my glasses off to see that one”. Another added, "I had to stare at it before I could see it”.

Hundreds of people realised their initial take on the image was off after analysing the photo. "Took me a while to figure this one out,” one user commented. “I'm curious as to how the people who saw a man running were able to explain away the fact that running man has a giant dogs head coming out of them,” added another. “The only way this is a man is if he has weird poodle hair or hat and is wearing a dog jumpsuit with weird paws attached and a dog face image on his back,” wrote fourth.

I don't know what that is, but it's not a man 😳 pic.twitter.com/hkjZW9ca0s

that is definitely not a man, well at least i cant do that with my leg pic.twitter.com/AWjOHJzmiE

I see the man with a backpack running in the snow. Then I read the tweet and saw the dog. Then I noticed two more dogs coming out of the trees

Looks like a man to me with a bear head on his back and 1 maybe 2 dogs to his left.
So what optical illusion are we supposed to be seeing?

I totally saw a guy running into the woods. After studying it i noticed his leg was bent the wrong direction. To be honest it wasn’t until I read some of the comments that I saw the dog. 🤣 Kudos! I was fooled!! 👏🏻👏🏻👏🏻 (Cue the haters, 3-2-1...)

I saw this earlier....so funny...at first I ONLY saw the man running. Then I saw what looked like a bear on his back. Only now am I seeing the poodle...snow poodle. That's a new breed. Snoodle.