A hilarious video of a dog, Milo,  sitting on top of a refrigerator, just like a cat, has inspired the Reddit community. The video has netizens in splits

The video shows that the Australian Shepherd has decided to leave his dog life, and take up the one of a cat. He can be seen sitting on top of the refrigerator, which usually the dogs dont do. His incredible eyes are wide open, while he is looking at the person making the video. The video was posted on Reddit with the caption, “Milo has decided to ditch the dog life, and become a cat.”

Milo has decided to ditch the dog life, and become a cat. from aww

It has garnered over 54.2k views on the Reddit. Netizens have showered a host of comments for the dog. While some are commenting on the incredible eyes that the dog has, others are talking about him being incredibly creepy. There are a few users who think that the dog is sitting on the refrigerator because he wants a snack from the owner.

A user said, “Those eyes are incredible.” Another said, “Incredibly creepy. Not sure what it is but that dog is both adorable and unsettling.” While another Reddit user said, “Not to pull the classic Reddit move but this coat/eye color is heavily associated with vision problems." There was another Reddit user who said, "I love the head tilt, like the guy recording is the strange one." While one user said, "It makes me so happy to see more and more Aussies with tails. Shows that there is a good side to humanity." 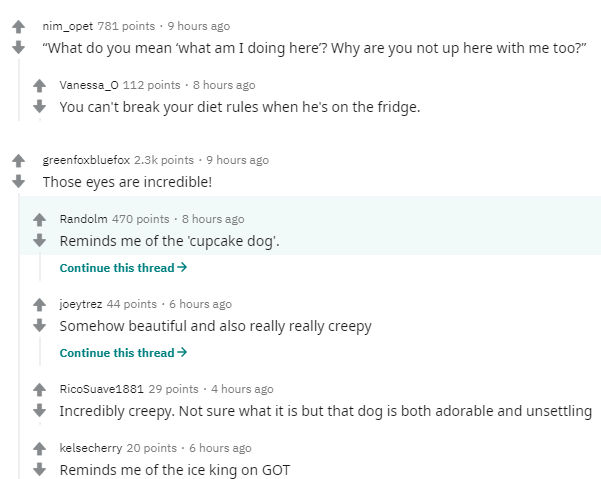 READ: Owner Ties Dozens Of Balloons To Dog To Make It Fly, Netizens In Splits