Users cite the video as an example of how humans must care about each other and the community in such times as the world enters global food shortage.

A video of a Labrador dog named Nala giving away his biscuit to a Bulldog, his best friend, has inspired the Reddit community. The 20-second clip was posted on Reddit by a user in which the two dogs can be seen seated when the owner gives a biscuit to one of them. The dog, however, in an adorable gesture, slides the biscuit forward towards the bulldog. Redditors were humbled by the kind act put up by Lana, and called the dog “nicer than most people”.

The video has amassed over 58.1k upvotes, which is 86 per cent and has gained 718 comments. Although the video was shared a year ago, it has recently resurfaced during the coronavirus pandemic, as users cite the dog's behaviour as an example of how humans must care about each other and the community in such times as the world enters global food shortage. People have been reported hoarding the essential items, stripping the aisles clean in the supermarket. That has led many others, including the pensioners and the elderly without the essential supplies. Redditors lauded the dog saying, “Give him The Congressional Medal of Honor”.

Dog shares the other half of her biscuit from aww

Read: UK’s Queenie, The Oldest Dog Going Strong And Healthy At The Age Of 21

Some even joked that their dogs would share anything but food. A Reddit user wrote, “My dog would never do this, hell when she’s with my parent's dog and she gets something while my parent's dog is in another room, she has to take it into the room my parent's dog is in, drop it on the floor so my parent's dog knows she has food, then eats it in front of their dog”. Another wrote, “ I've never seen a dog do this. I mean, altruism like this isn't exactly instinctual and it isn't easy getting a dog to not scarf down their food much less share”, wrote another user, “I wonder how this good pupper learned to share,” he added. 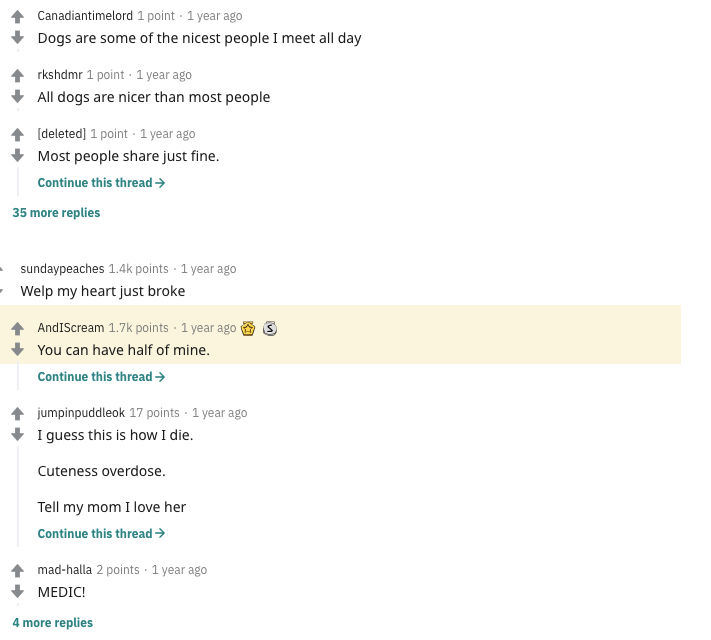 Read: Video Of Dog Trying To Save Its Toy From Waves Is Winning Hearts On Internet

Read: Video Of A Cat Wondering About Owner's Magician Skills Has Impressed Redditors