On Monday evening, ICRM released data stating that 2.17 lakh tests had been conducted till 9 pm, of which 9,341 people had tested positive.

Coronavirus cases in India have crossed the 10,000 mark, as per the Ministry of Health and Family Welfare. According to the latest update, the number of total cases in the country has climbed to 10,363, while the death toll stands at 339. On Monday evening, the Indian Council for Medical Research released data stating that 2.17 lakh tests had been conducted till 9 pm, of which 9,341 people had tested positive. The Council reportedly conducted 21,806 tests, testing at a rate of roughly 10% each day. 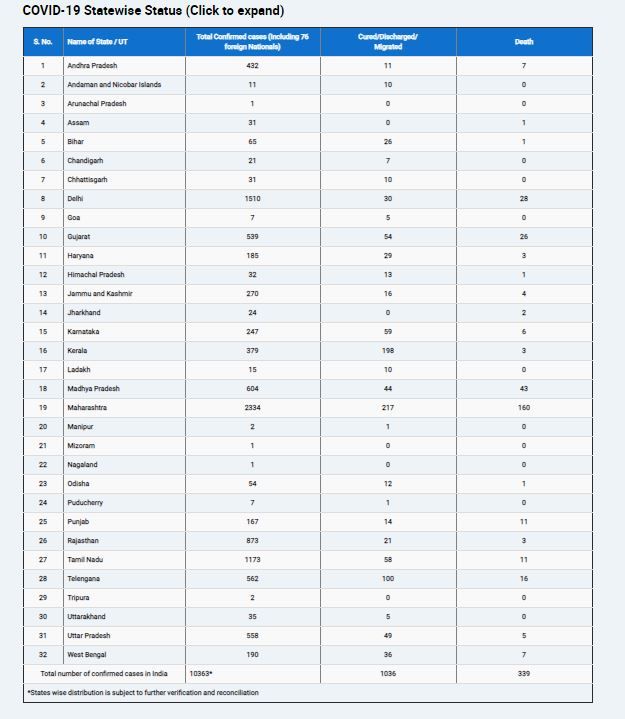 The country currently is in a 21 day lockdown period that was announced by PM Modi on March 24 and on Saturday, PM Modi met with the Chief Ministers of all states via videoconference in order to assess the situation and make a decision regarding the extension of a lockdown. Multiple states such as Odisha, Punjab, Rajasthan, Maharashtra have already announced an extension till April 30.

During the meeting on Saturday, PM stressed that the next three-four weeks will be critical to determine the impact of steps taken till now to curb the spread of the virus. He suggested specific measures for agriculture and allied sector including modification of APMC (Agricultural Produce Market Committee) laws to facilitate the sale of farm produce. Such steps will help farmers sell products at their doorstep, PM said.

According to a government statement, the PM categorically assured that India has adequate supplies of essential medicines and said that measures are being taken to ensure the availability of protective gear and critical equipment for all front-line workers. He also gave a stern message against black marketing and hoarding.

PM Modi will be addressing the nation for the fourth time on Tuesday morning at 10 am, where he is likely to announce an extension of the lockdown. Multiple states such as Odisha, Rajasthan, Tamil Nadu, and Maharashtra have already announced an extension at least till April 30.