IIT Bombay administration on Tuesday issued a warning circular to hostel residents against participating in any 'anti-national, anti-social, or any other undesirable activities.' Republic TV has accessed a copy of the circular and it mentions that without the prior approval of the Dean of Student Affairs (DoSA), any form of speech, plays, and music, even if the faculty is part of the gathering are banned within the IIT Bombay campus.

IIT-B has been witnessing protests against CAA

In the circular, 15 rules are been listed out which was sent via email by the Associate Dean of Student Affairs to the students and has asked them to follow the rules at the times. IIT Bombay administration has come out with the circular/rules at a time when students have spoken against CAA and the violence that has been happening on the other campuses. 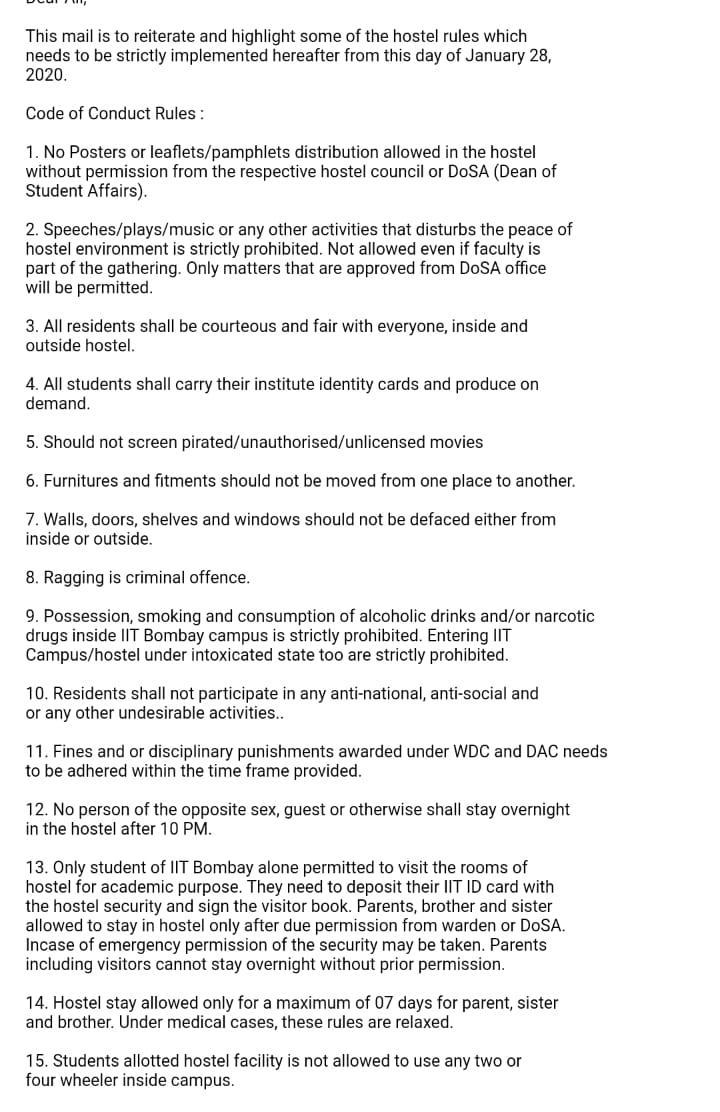 'Only matters approved from DoSA office will be permitted'

One of the rules specifies, “No posters or leaflets/pamphlets distribution allowed in the hostel without permission from the respective hostel council or DoSA (Dean of Student Affairs)”.

“Speeches/plays/music or any other activities that disturb the peace of the hostel environment is strictly prohibited. Not allowed even if the faculty is part of the gathering. Only matters that are approved from DoSA office will be permitted”, says another rule. "Residents shall not participate in any anti-national, anti-social and or any other undesirable activities," another rule added in the circulation.

The circular warns to students stating, “Any violation of the above can lead to partial or permanent hostel suspension”.

A day before the JNU violence, a similar letter emerged from IIT-Kanpur, where the administration was criticized for a probe into claims students protesting against the citizenship law had hurt sentiments. The letter promised to stand by the students in "your attempts to express yourself in a responsible manner" after a controversy over students singing Urdu poet Faiz Ahmed Faiz's song, labeled "anti-Hindu" by some students, at a protest last month.

READ | Amid reports of tie-up between MNS-BJP, NCP calls meeting a courtesy