Cong’s Digvijaya Singh Attacks JNU VC, Calls Him A 'dummy In The Hands Of BJP/RSS'

Taking to microblogging site Singh said that the JNU VC was a dummy of the BJP and RSS and did not deserve the post of the VC of Indian's foremost university.

Congress leader Digvijaya Singh on Sunday took a jibe at the Jawaharlal Nehru University Vice-Chancellor Jagadesh Kumar. Taking to microblogging site Singh said that the JNU VC was a dummy of the BJP and RSS and did not deserve the post of the VC of Indian's foremost university. Singh also mentioned that Prime Minister Narendra Modi must take the advice of former HRD minister Murli Manohar Joshi and sack Jagadesh Kumar.

Singh in his tweet said, "JNU VC is a dummy in the hands of BJP/RSS doesn’t deserve to be the VC of India’s foremost University. PM should heed to the wise advise of former HRD Minister and eminent Educationist Dr Murli Manohar Joshi and sack him immediately. He is the PROBLEM in JNU."

BJP's veteran Murli Manohar Joshi issuing a statement on Thursday, Joshi said that the attitude of the V-C to not implement government proposal is "deplorable". He cited that even after HRD ministry's two attempts to settle the matter in JNU, "VC is adamant." He added that he should not be allowed "to continue  on the post."

Joshi was pointing out to the fee hike proposed in the hostel manual, against which the JNU students have been protesting since October. Joshi, who served as the HRD minister under Atal Bihari Vajpayee government claimed that the HRD ministry advised the V-C to speak to students and teachers regarding the fee hike, however., he did not do so. 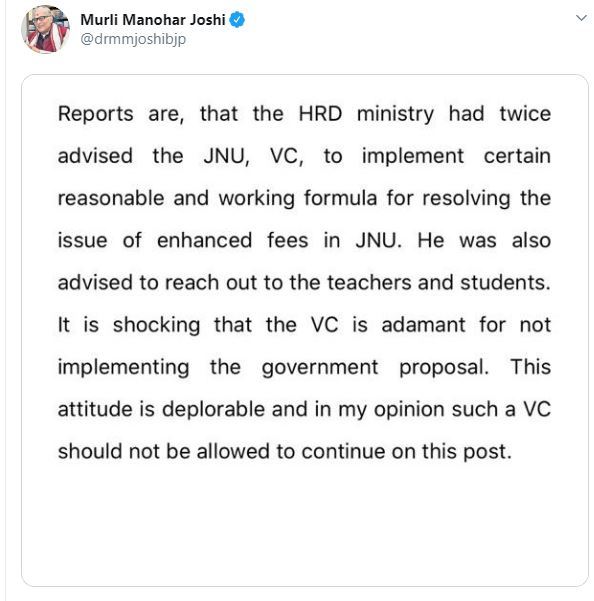 READ | JNU VC Jagadesh Kumar: 'Students Living Illegaly On Campus May Be Behind The Violence'

On Sunday evening, JNU students were attacked by masked goons. As many as said 50-odd goons entered the campus and went on a rampage, attacking people and vandalising cars. JNU students union president Aishe Ghosh, was severely injured. In the video that surfaced right after the attack, she is heard saying: "I have been brutally attacked by goons wearing masks. I have been bleeding. I was brutally beaten up".

Meanwhile, the ABVP also alleged that their leaders have also been attacked and their presidential candidate Manish Jangid has also been beaten up. Moreover, 11 of their workers are missing.  Releasing a statement, Ashutosh Singh of ABVP alleged that they have been attacked by students affiliated to leftist student organizations.