Punjab Chief Minister Captain Amarinder Singh on Saturday appealed to the Union External Affairs Minister S. Jaishankar to make arrangements for the return of 104 Indian women stranded in Muscat. Taking to the microblogging site, Singh said that that he had ordered the ADGP, NRI affairs, to nab the agents who cheated them. He also lauded the efforts of Dubai-based hotelier S.P.S. Oberoi, who has consistently helped Indians in distress abroad. Fourteen of them are from Punjab, as per reports. 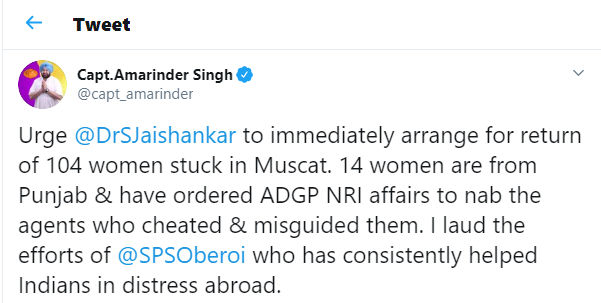 According to media reports, a video has gone viral on social media platforms showing several Indian women pleading for help, who have sought refuge at the Indian embassy in Muscat (Oman) after escaping from the clutches of their oppressive landlords. A majority of the women belong to Andhra Pradesh.

In the video, they narrated their ordeal of how they were duped by travel agents—first in India and then in Dubai. They claimed that agents sent them to the UAE on a tourist visa with an assurance that their contacts in Dubai would help them get jobs as a nurse and teachers, as per reports.

Reports further mention that once the women reached Dubai, they were forced to work as domestic help. They were later sold off to rich landlords, who confiscated their passports and made them work for 18 hours a day, often beating them if they refuse to follow their orders. The women somehow managed to escape and reached the embassy. They have been living in the embassy for the past six to 11 months, as per reports.

After the video went viral, Dubai-based businessman Surinder Pal Singh Oberoi offered to help the beleaguered women. He agreed to pay their repatriation costs, which included airfare, and immigration and overstay fines.