'UP Is Mourning..,' Says Akhilesh Yadav Over Lakhimpur, Avers 'not The Time For Festival'

In a farmers' protest in Uttar Pradesh's Lakhimpur Kheri, four farmers lost their lives after an SUV allegedly ran over them. The matter is being investigated. 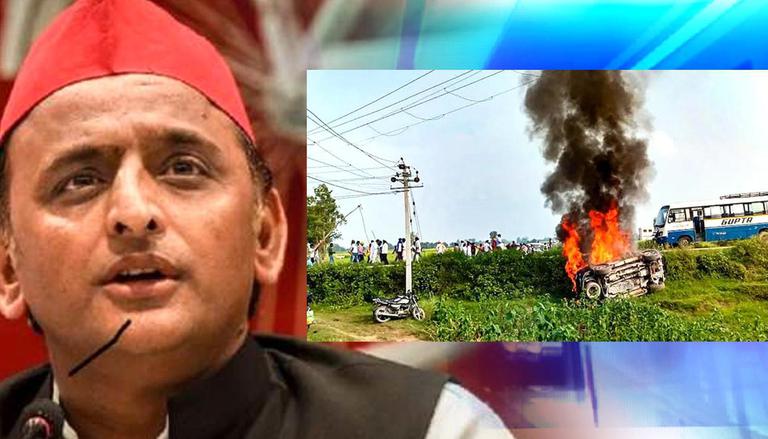 
Currently put under house arrest, Samajwadi Party chief Akhilesh Yadav on Tuesday tweeted saying 'this is not the time for festivals'. The statement from the SP leader came as nine people lost their lives including farmers and BJP workers during a farmers' protest in Lakhimpur on October 3, Sunday. An FIR has been filed against Ashish Misra the son of Union MoS Ajay Misra Teni who had allegedly run over one of the farmers in Lakhimpur Kher.

UP is mourning over the killings of farmers: Akhilesh Yadav

In a major breakthrough on Monday between farmers and the Yogi Adityanath administration, UP Govt announced that it will provide Rs 45 lakhs to the 4 farmers' families who lost their lives in Lakhimpur. Addressing a joint press conference flanked by BKU leader Rakesh Tikait, ADG (Law & Order) Prashant Kumar added that Rs 10 lakhs will be given to the injured, a govt job for families' kin and probe headed by a retired High Court judge. Farmers have now allowed the police to take the victims' bodies for post-mortem after being assured of arrests soon.

Lakhimpur Kheri violence - Who said what

Amid ongoing investigation in the matter, the opposition leaders have made every attempt to criticise the ruling Government. The Congress party has alleged the BJP of illegally detaining Priyanka Gandhi while other leaders including Akhilesh Yadav, Mamata Banerjee, and Ashok Gehlot, Navjot Singh Sidhu has blamed the state government. On the other side, Union MoS Ajay Mishra who has been accused addressed a press conference on Monday and denied allegations levelled against him and his son in the case. The MoS stated that the incident was being politicized by anti-social elements who were otherwise failing to gain traction from the farmer's protest.

The tragic accident took place when farmers were protesting against the three farm laws ahead of an event in Uttar Pradesh's Lakhimpur-Kheri district on October 3 where UP Deputy CM Keshav Prasad Maurya was invited as the Chief Guest. Since the morning, the protesters had gathered with black flags at the helipad in the Maharaja Agrasen Ground in Tikonia where Maurya was scheduled to land. Thereafter, violence erupted between farmers and BJP workers leaving 8 persons including 4 farmers dead and many others injured.