Aakash Chopra On How He Would Have Described Dhoni's World Cup-winning Six, Gets Trolled

Aakash Chopra has been one of the finest commentators over the years and has entertained the audience with his unique style of commentary and presentation skills. However, the stylish commentator had one wish and that was to commentate on the then Indian skipper Mahendra Singh Dhoni's World Cup-winning six in the 2011 final against Sri Lanka at the iconic Wankhede Stadium.

WATCH: Harsha Bhogle stunned by Ravindra Jadeja not once but twice after the series-decider

Aakash Chopra took to the micro-blogging site and wrote that he was not on commentary when MS Dhoni had sealed it with a six. He then added that on the 2nd of April 2011, had he been in the commentary box, then he would have said something like- 'Dhoni ka balla ghuma, iss baar sirf Wankhede nahi pura desh jhuma'. The stylish commentator then concluded by saying that it was a night to remember and that the veteran wicket-keeper batsman is a player to cherish. Chopra had said this on the occasion of the 2011 World Cup-winning captain's 15th anniversary in international cricket.

However, the cricketer-turned-commentator's idea did not go down well a few of the fans and they came forward to troll him. Here are some of the reactions. 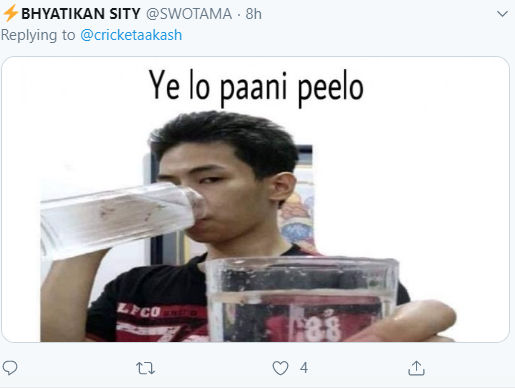 READ: Ind vs WI: Harsha Bhogle responds to fans criticising him for speaking to Jadeja in Hindi

Sri Lanka who were playing in their second straight World Cup final had posted a stiff total of 274/6 in their 50 overs. In reply, India got off to a horrendous start after big-hitter Virender Sehwag was dismissed for a second-ball duck by Lasith Malinga. The Men In Blue were in a spot of bother after Sachin Tendulkar's dismissal as the scorecard read 31/2. Gambhir then took the charge of scoring runs and was ably supported by a young Virat Kohli (35) as the duo added 83 runs for the third wicket stand.

After Kohli's dismissal, in a rather surprising move, MS Dhoni came out at number four ahead of an in-form Yuvraj Singh. The two were then involved in a 109-run fourth-wicket stand. Gautam Gambhir was castled by Thisara Perera for a 122-ball 97. However, it did not matter as the match was in India's grasp by then and MS Dhoni finished it in style by dispatching Nuwan Kulasekara into the stands as India won their second World Cup after a long wait of 28 years.

"Dhoni finishes off in style. It's a magnificent strike into the crowd. India lift the World Cup after 28 years. The party has started in the dressing room and it's an Indian captain, who has been absolutely magnificent on the night of the finals," said Ravi Shastri from the commentary box.

READ: Indian cricket fans have only one regret in 2019, here's what it is