Indian Cricket Fans Have Only One Regret In 2019, Here's What It Is

Virat Kohli had said that 2019 was a great year for Team India except for one moment. Even the Indian fans were gutted after Kohli had spoked about that moment

Indian team ended their 2019 with an ODI series win against West Indies by four wickets at the Barabati Stadium in Cuttack on Sunday. Kohli was adjudged Man of the Match for his splendid knock of 85 where he had played an anchor's role to near perfection in the Men In Blue's run chase. However, while speaking about the Indian team's performance this year, Kohli said that he only had one regret and even the Indian cricket fans were disappointed with that moment as well.

Indian cricket fans have only one regret in 2019

While speaking about the Men In Blue's performance during the post-match presentation ceremony, skipper Virat Kohli said that 2019 has been one of the best years for Indian cricket except for those 30 minutes of the World Cup semi-final against New Zealand at the Old Trafford in Manchester. Virat then added the Indian team will keep chasing that ICC trophy as he reckons that this group deserves it for the amount of hard work they have put in. The batting superstar also added that they have a vision in place. Meanwhile, the governing body of world cricket, International Cricket Council (ICC) also asked the Indian fans about Kohli's statement and Team India's performance in 2019. 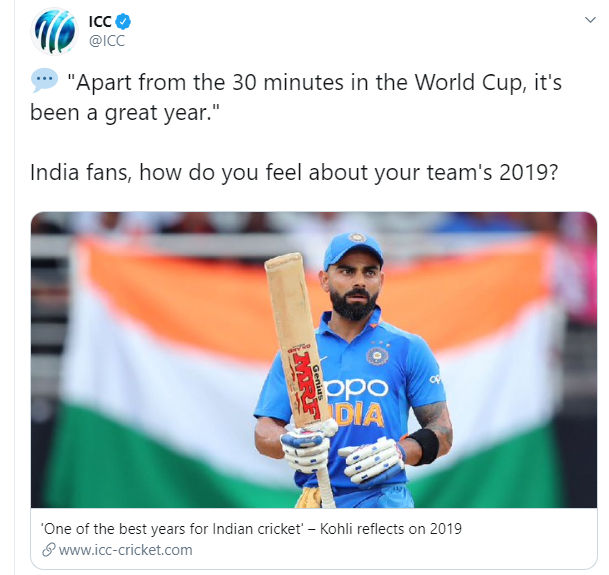 Even the Indian fans were gutted after Kohli had highlighted that heart-breaking loss. Here are some of the reactions. 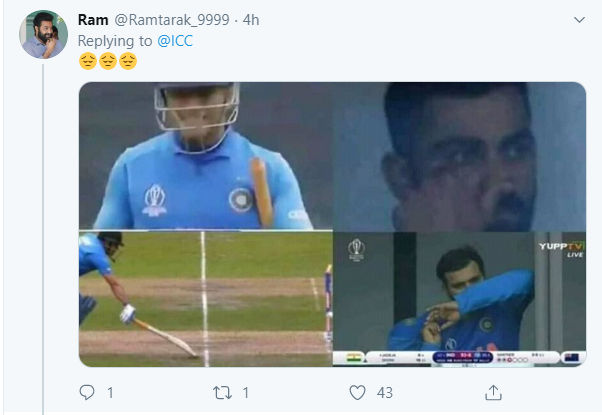 READ: India 'A' take the mandatory Yo-Yo test out of their scheme of things: Reports

Chasing a target of 240 in a rain-curtailed semi-final, India who were considered as the title favourites were reduced to 5/3 in the fourth over as the terrific opening spell from Trent Boult and Matt Henry sent back the famed top-order batsmen Rohit Sharma, Virat Kohli and KL Rahul to the pavilion early. Dinesh Karthik followed soon but youngsters Rishabh Pant and Hardik Pandya rebuilt the innings and just when they looked set, they got out playing rash shots.

Had it not been for a 116-run seventh-wicket stand between MS Dhoni (50) and Ravindra Jadeja (77), then the two-time winners would have suffered an even bitter defeat. Finally, Trent Boult succeeded in removing Jadeja but with Dhoni still at the crease, India's fourth World Cup final appearance was still on the cards. Unfortunately, a direct hit from Martin Guptill had the veteran cricketer short of his crease as Virat Kohli & Co.'s campaign came to an agonizing end.

READ: As MS Dhoni completes 15 years in world cricket, here's the best knock of the 'Finisher'