Cheteshwar Pujara left a hilarious comment on Shikhar Dhawan's latest Instagram upload where the latter can be seen alongside Bhuvneshwar Kumar. Read on.

India opener Shikhar Dhawan is currently out of the Indian team due to an injury. The southpaw, who is known for his entertaining game on the field, is as entertaining off the field as well. He keeps on winning the hearts of his followers regularly on Instagram with funny, witty or sweet posts.

On Monday, Shikhar Dhawan took to Instagram to post a picture of himself along with Bhuvneshwar Kumar, who is also sidelined due to injury. Both of them were donning T-shirts and shorts and were seen carrying backpacks. Shikhar Dhawan had a funny caption for the photo as he wrote, "That face when you purposely enter late to school 😂 @imbhuvi". 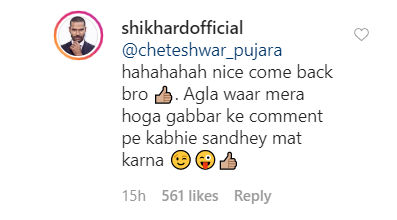 Shikhar Dhawan Might Miss First Phase Of IPL Due To Shoulder Injury: Reports

Shikhar Dhawan is sidelined from the upcoming New Zealand Test series due to a shoulder injury. He got injured when he had dived to stop the ball during the third ODI against Australia at Bengaluru on Sunday. He couldn't take further part in the game as he had to walk off.

Now, it has been learned that the elegant opening batsman might miss the initial stage of the Indian Premier League (IPL) which is slated to begin from March 29. As per reports, the southpaw will be out of action for not less than 10 weeks. He would once again be representing Delhi Capitals in what will be his second season with the franchise.