Fact check: A video has gone viral on the internet which claims that West Indies all-rounder Kieron Pollard passed away after meeting with a car accident.


West Indies all-rounder Kieron Pollard is currently playing in the Abu Dhabi T10 League 2021 where he is leading the Deccan Gladiators franchise. However, a fake video has gone viral on the internet which claims that Kieron Pollard passed away after meeting with a car accident. The 'Kieron Pollard death' news sent the internet into a frenzy as social media users fell for the Pollard death hoax and soon the news went viral.

Fake news of #Pollard accident , he is fit and fine

Fake news of #Pollard accident , he is fit and fine

Shocked to hear the fake new spreading around regarding the demise of #Pollard !

Guys he's alive and healthy and is playing the t10 series!!

Near heart attack to me in shock, btw!!🤣🙄 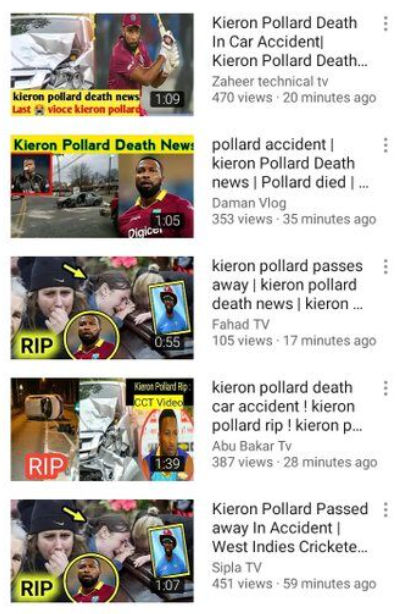 Meanwhile, Pollard's side got off to a dismal start in the Abu Dhabi T10 League 2021 as they lost to Pune Devils by seven wickets in their opening game. Having won the toss, Deccan Gladiators were invited to bat first. The Pollard-led side managed to post 104/5 in their 20 overs with Azam Khan top-scoring for his side with a 13-ball 32. Pollard had an abysmal outing as he could only score two runs after playing out six balls.

In response, the Devils chased the target comfortably with three balls to spare. Kennar Lewis starred for Pune as he scored a blistering 28-ball 57 to guide his team to victory. The Gladiators will look to put this loss behind and make a comeback against Team Abu Dhabi who they will play against on Friday, January 29 at the Sheikh Zayed Stadium in Abu Dhabi. Notably, Pollard was among the many West Indies players who pulled out of the ongoing Bangladesh tour due to COVID-19 fears. The 33-year old instead decided to travel to the UAE for the Abu Dhabi T10 League 2021.