Frustrated Stuart Broad Takes On Indian Fan, Claims England Were Best Side In 50 Over WC

Already disappointed with the no reserve day rule for the semifinals of the women's T20 World Cup leading to England to be knocked out of the chase to glory, Stuart Broad took on an Indian fan on social media for targeting the England men's team. Shortly after the semi-final contest between India & England was abandoned due to rain, Stuart Broad slammed ICC for not having a reserve day in the place and was in turn greeted by fans pointing hands at the men's England team - who had won the 2019 World Cup on the boundary count rule - indicating that rules were rules. However, Stuart Broad hit back at an Indian fan and made a huge claim that England were the best side leading into the 2019 World Cup. 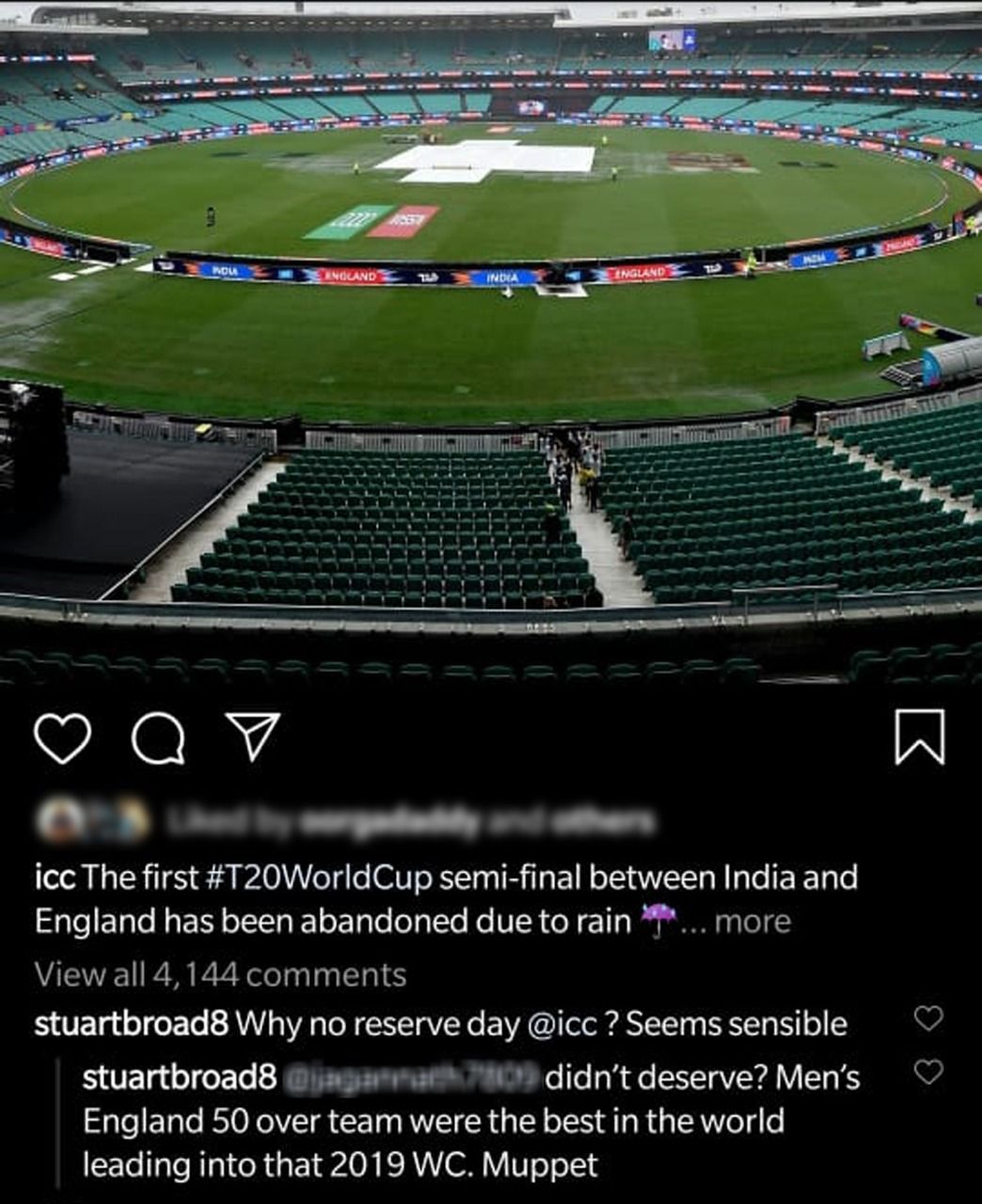 England men's team pacer Stuart Broad lashed out at the International Cricket Council (ICC) for not scheduling a reserve day for the Women's T20 World Cup semi-finals as the contest between India and England was abandoned without a ball being bowled due to rain. An unbeaten India looked to lock horns with a confident England only to find out that rain was going to play spoilsport in the contest. Cricket Australia had revealed that ICC did not grant permission to have a reserve day for the semi-finals despite being informed of the bad weather beforehand. India have now qualified for their first-ever T20 World cup final after making seven attempts to do so.

Who won IND W vs ENG W? The Rain Gods did!

A rainy day was expected at the Sydney Cricket Ground and the fact that there were no reserve days for the semi-finals added some very visible tension to the faces of the English camp. After all, the rule was that the team with more wins in the group stages will qualify to the final, in case the semi-final get washed off. And that is exactly what happened as the first semi-final was finally called off and on the basis of India's four wins against England's three, the Women in Blue qualified for their first-ever T20 World Cup final post the IND W vs ENG W live semi-final.

Now India is technically supposed to meet the winner of second South Africa vs. Australia semi-final on Sunday but if the rains do not subside, South Africa will qualify for the final in a very similar fashion. In case it rains in Melbourne on Sunday, the ICC has arranged for a reserve day that can host the match. However, in the extreme case of both days getting washed off, India and their opponents will have to share the 2020 ICC Women's World T20 Trophy.