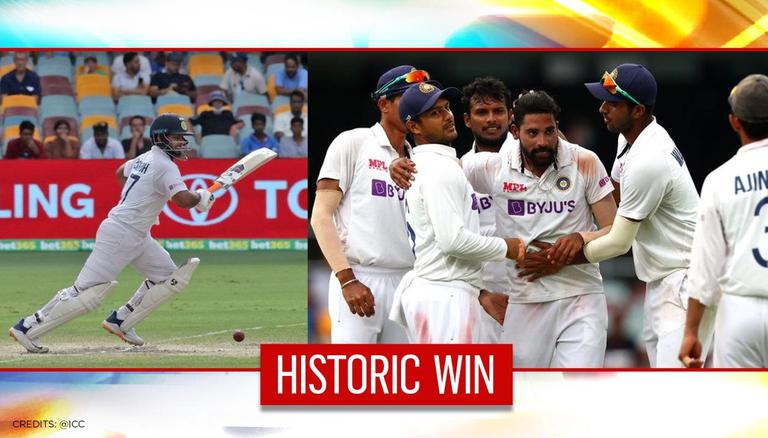 India created history at the Gabba on Tuesday after defeating Australia in the 4th Test thereby ending Australia's 31 Test unbeaten streak in Brisbane. Rishabh Pant and Washington Sundar went all guns blazing in the final session to help India chase down the mammoth 326-run target set by Australia. Wicketkeeper-batsmen Rishabh Pant kept the momentum going for India after Pujara's dismissal and held his nerve to get the visitors across the line. With the win at Brisbane, India now find themselves within visible distance of reaching the World Test Championships finals scheduled to be held at Lords, England.

A valiant Cheteshwar Pujara stood firm like a wall before a relentless Aussie bowling attack, facing 211 deliveries and scoring 52 runs before being dismissed. Rishabh Pant then took it upon himself to get India across the line, finishing the match with a 89-run knock laced with nine boundaries and one maximum. Washington Sundar scored a quickfire 22-run knock towards the end of the run-chase after whih Rishabh Pant finished the game in style with a boundary.

"It means a lot to us. I don't know how to describe this, but our boys showed a lot of character and determination after the Adelaide Test. I'm really proud if each individual. The conversation between Pujara and me was that he would bat normal, and I would take it on. Credit to Pujara, the way he handled the pressure was magnificent. Rishabh and Washington were very good at the end. Taking 20 wickets was the key, so we opted for 5 bowlers. Sundar brought the balance in place of Jadeja. The intention was clear to play five bowlers. Siraj played two Tests, Saini just one, so it was inexperienced but the character shown by the bowlers and everyone else was incredible", Indian skipper Ajinkya Rahane said in the post-match presentation.

Here are 4 remarkable headlines from this historic victory: