Jimmy Neesham gave a savage reply to a fan who had reminded him of New Zealand's 0-5 whitewash in the recent T20I series. Kiwis beat India 3-0 in the ODI series

Jimmy Neesham seemed to be on the seventh heaven after New Zealand beat India in the third and final ODI at the Bay Oval on Tuesday to complete a whitewash. This was also Team India's first-ever ODI series whitewash since 1989. Apart from the ODI series win, Neesham also discussed the funny argument that he had with KL Rahul during the first innings. However, he gave a savage reply to a fan who had asked about the whitewash that the Black Caps had suffered in the T20I series.

READ: Dale Steyn heaps praise on Jofra Archer, has a very important message for him

Neesham's savage reply to a fan

A fan had come forward and asked Jimmy Neesham how he felt after New Zealand were whitewashed 0-5 in the T20I series to which the all-rounder replied by saying that he literally does not know about it. Nonetheless, he had posted a picture of him celebrating along with team-mates Kyle Jamieson and Tom Latham after having beaten India in the ODI series with a caption which read 'That series-winning feeling'. 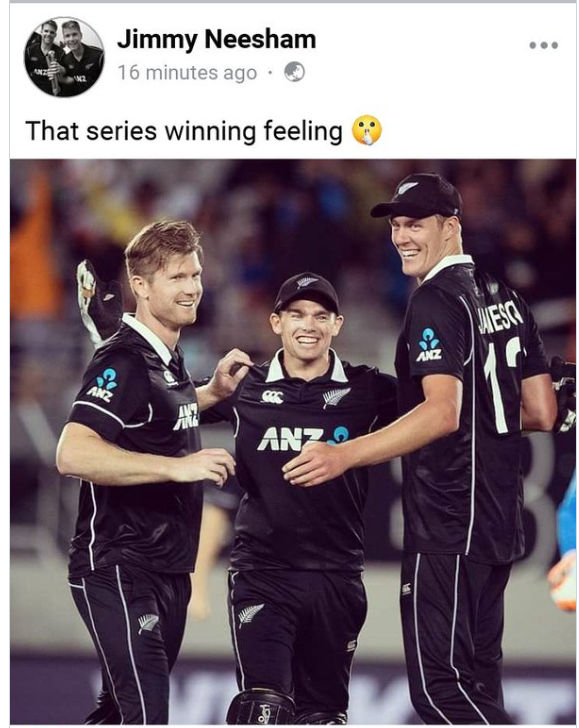 Neesham was not a part of the Kiwi squad that failed to win a single T20I game against India in the recent T20I series. Even though the hosts had lost the first two matches comprehensively, they ended up losing the remaining three games despite being in the driver's seat and out of those, there were two consecutive super overs which has been haunting the Black Caps for a long time which also includes that unfortunate World Cup final in July last year.

The altercation had taken place during the 20th over of the first innings which was bowled by Jimmy Neesham. On the final ball of that over, Rahul pushed the ball towards the mid-on fielder and set off for a quick single instantly. While he was running Neesham accidentally came in his way. Nonetheless, no damage was done as he was able to complete the single. But, he turned back after reaching his crease and was seen saying something to the bowler. Even Neesham was seen smiling and saying something as well.

The two then had a fist bump and also exchanged smiles which makes it seem that it was only a friendly argument as neither the on-field umpires or the match officials had to intervene.

READ: Jimmy Neesham plays down banter with K L Rahul, asks him to 'save some runs' for the IPL