KXIP will see the return of Glenn Maxwell to the playing XI in IPL 2020. The all-rounder last played as the captain of the side in IPL 2017, ending fifth.

On Wednesday, Australian cricketer Glenn Maxwell announced his engagement to long-time, Indian-origin girlfriend Vini Raman. The couple had been public about their relationship for a couple of years now and their engagement excited a lot of Maxwell's Australia teammates. Even Maxwell's IPL 2020 side, Kings XI Punjab, were thrilled to hear about the exciting news that came from the star player and his girlfriend. 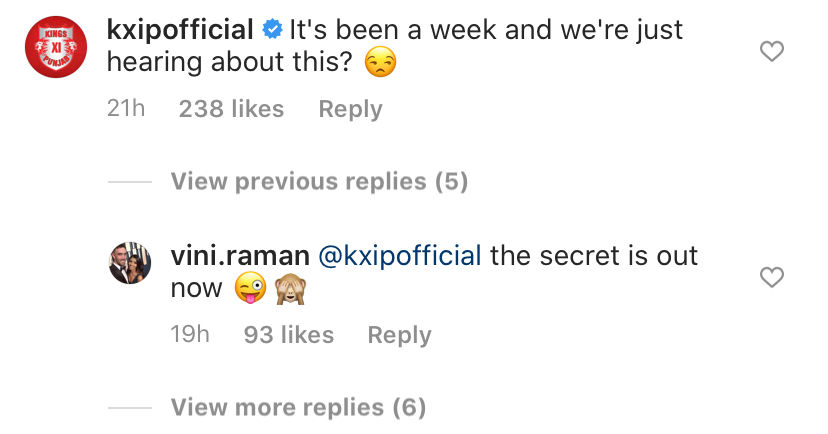 After Maxwell's fiancee, Vini Raman announced the couple's engagement - the Kings XI Punjab made a hilarious comment on her picture asking why they were not informed about the developments between the couple earlier. Raman acknowledged the hilarious couple and exclaimed that the "secret" is out now. Australian batsman Usman Khawaja's wife, Rachel also congratulated Raman on her engagement to Maxwell. On Maxwell's post, fellow Australian cricketers Chris Lynn and Marcus Stoinis were among the many to congratulate Maxi.

The IPL 2020 will see Glenn Maxwell coming back to a very familiar setting as the former skipper of the Kings XI Punjab rejoins the team that gave him the opportunity to become the 2014 IPL MVP. Maxwell had an amazing first season with KXIP in 2014 where he touched the scores of 90 with relative ease. Maxwell remained an important member of KXIP over the years and even proceeded to captain the side in 2017.

He was released by the side before the 2018 IPL Auctions and went over to the Delhi Capitals, where he was unable to do much. After skipping the 2019 IPL, Maxwell was back in the IPL 2020 Auction pool and the Kings XI Punjab wasted no time in going all out for him. KXIP availed Maxwell's services for a massive Rs. 10.75 crores making him IPL 2020 Auction's second-most expensive purchase.

Maxwell will now join KXIP under his its new captain, KL Rahul along with teammates like Chris Gayle and Sheldon Cottrell. The Kings XI open their IPL 2020 campaign on March 30 against the Delhi Capitals at the Arun Jaitley Stadium.