BCCI President and former Team India skipper, Sourav Ganguly poked fun at Sachin Tendulkar, who is currently in Australia after featuring in the Bushfire Bash

BCCI President and former Team India skipper, Sourav Ganguly poked fun at Sachin Tendulkar, who is currently in Australia after featuring in the Bushfire Bash earlier on Sunday. Tendulkar on Thursday shared a picture of him sitting on a bench on Instagram, which he captioned, "Soaking up the Sun 🌞!" Ganguly swiftly commented on the picture lamenting about his luck and said, "Keep Holidaying." Former teammate Harbhajan Singh also reacted on Sachin's picture saying, "Paji which floor are u targeting ??? 😜" as the batsman posed looking upwards. 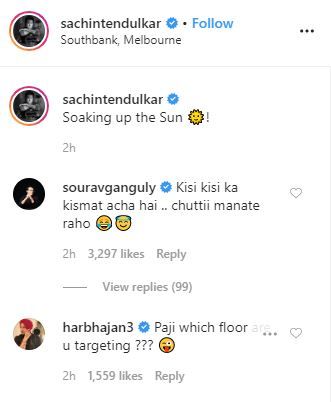 Sachin bats after more than half a decade

Sachin Tendulkar was seen in his batting avatar during the Bushfire Bash charity game at the Big Appeal double-header at the Junction Oval in Melbourne on Sunday. What delighted one all was that the Master Blaster was seen batting after five-and-a-half years. The bowler who bowled to him was star Australian women's team all-rounder and world champion Ellyse Perry.

''Five-and-a-half-years since the great man has had a hit out in the middle and he is facing Perry steaming in. And he just works it off the hip nicely. Oh, God! (due to a misfield at fine-leg) and it's through the gap and Tendulkar is away with the boundary'', said the commentators on air.

After facing Ellyse Perry, Sachin Tendulkar said that he was more nervous than the Australian pacer. He was not sure if he was going to connect the ball with his bat or not. Sachin Tendulkar also said that post his net session, he took some throwdowns to get ready for the challenge. However, he was still not sure if the ball will make contact with his bat in the game. Tendulkar accepted to bat despite nursing a shoulder injury.

"They have already had a huge impact, if you see even in 2017, I was watching the finals of the World Cup, which took place at Lords and India did well. We were in there till the end, just in the last I thought, that the momentum shifted. But from the impact point of view, they have had a massive impact and then there are young girls in India who are picking up a cricket bat or ball, they are being motivated by these players," Tendulkar said in a video posted by International Cricket Council.