Sourav Ganguly: The BCCI chief shared a candid snap on social media which became the subject of some light ribbing from his daughter Sana Ganguly on Instagram.

BCCI President Sourav Ganguly led the successful Day-Night Test match in Kolkata. The former Indian captain has been busy preparing for the historic Test ever since taking charge for the top job.

India won the game by an innings and 46 runs on Day 3 itself. Ganguly was present during the post-match presentation where a picture of him was clicked where he seemed to be frowning.

He later shared that candid snap on social media, which became the subject of some light ribbing from his daughter Sana Ganguly on Instagram.

Commenting on the picture, Sana asked her father as she commented, “What is it that you’re not liking?” To this Sourav Ganguly replied: “That you’re becoming so disobedient.”

This led to a hilarious reply from Sana who said: "Learning from you."

Here's a look at Sana's replies 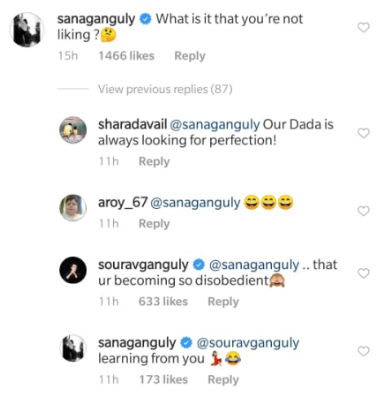 Ganguly, who made the Day-Night Test into a reality while talking to the official broadcasters of the India vs Bangladesh series said that he was relaxed, relieved and happy. He wanted to take that step for Test cricket as it was really important to revive the format in India. He added that people were not turning up for Test cricket so they did a lot of things such as promotions during and before the Test. Ganguly said that tickets were sold out throughout even on Day 3 though the game was expected to finish early.

The BCCI chief went on to recall the 2001 Test (India-Australia) when there were more than 100,000 people in this stadium and added that he did not want champions like Virat Kohli, Rohit Sharma or Ishant Sharma to play in front of empty stands. He concluded that he was extremely happy to see people turn up for the match and that the Day-Night Test should be played across India and not just in Kolkata.