Earlier, it was revealed that Edge will appear on the March 9, 2020 episode of WWE RAW. Now, the official website of the venue has confirmed the rumours.

It’s been almost a month since Edge was attacked by Randy Orton on WWE RAW. Since then, fans are eagerly waiting to see Edge make his much-awaited return and confront The Viper. Earlier, wrestling expert Brad Shepard revealed that the Rated R Superstar will appear on the March 9, 2020 episode of WWE RAW. Now, the Capital One Arena has confirmed the rumours and revealed that Edge will be present in the Arena on March 9, 2020. 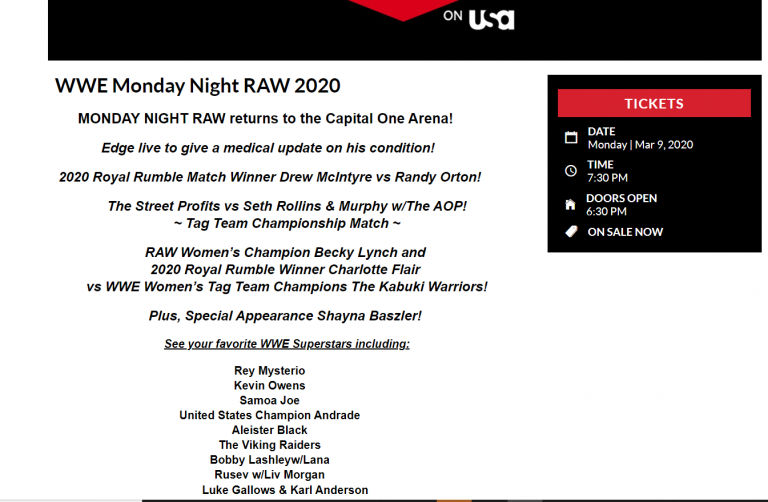 It is also revealed that Edge will be giving an update on his WWE future. On the same day, Randy Orton is scheduled to fight Royal Rumble 2020 winner Drew McIntyre. It is expected that Edge can enter the ring after the match and confront Randy Orton. The segment is scheduled to take the storyline to the next step. Edge can also challenge Randy Orton for the WrestleMania 36 match.

It has been revealed that Edge has signed a 3-year contract with WWE. The Rated R Superstar is allegedly getting $9 million to make 25 televised appearances and perform in 9 matches in three years. Now that he has performed at Royal Rumble 2020 and appeared on an episode of WWE RAW, Edge has 8 matches and 24 appearances left.

Edge made his return to the WWE RAW ring after an incredible Royal Rumble match. He then made his return official and started thanking the WWE universe. Randy Orton walked in and welcomed the Hall of Famer. He called Edge his brother and asked for the return of the ‘Rated RKO’. Fans liked Randy Orton’s idea and answered with "YES!" chants. As Edge was about to accept, Orton delivered an RKO to a chorus of boos. He started punishing Edge with steel chairs and closed the show after standing tall in front of Edge’s unconscious body.

Also Read l WWE news: The Usos have a 'straight-up' reason behind their dramatic new look