Stone Cold Steve Austin recently retweeted a picture from a 1998 episode of RAW where the Undertaker crucified him after the main-event tag-team match. 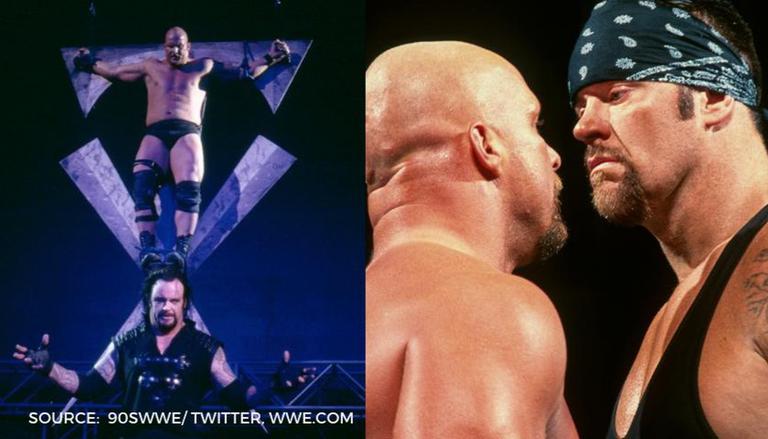 Just a few days after The Undertaker said his final farewell to the WWE Universe at Survivor Series 2020, Stone Cold Steve Austin took to Twitter and reminisced the controversial storyline the two were involved in. The Rattlesnake retweeted a picture from the December 2, 1998, episode of WWE RAW where the Undertaker crucified him after the main-event tag-team match. Though the promotion got a lot of heat for mocking a religious symbol and want it stands for, Stone Cold Steve Austin calls it “another day at the office”.

Stone Cold Steve Austin and The Undertaker have feuded multiple time in the past, but their most controversial feud came in 1998 when The Phenom returned as the leader of ‘Ministry of Darkness’. The two feuded over the WWE Championship (then WWF Championship) for months, which also featured icons like Mankind, The Rock, Paul Bearer and Kane. This led to a Buried Alive match between the two at Rock Bottom 1998, but a week before that, Stone Cold Steve Austin teamed up with Mankind to take on Undertaker and The Rock in a tag-team match.

Mankind went after Undertaker before the bell but was stopped by The Rock and got punished instead. Stone Cold Steve Austin came in for the save, but a brawl started on the ramp. After the commercial break, the starting bell rang and The Phenom took over, chokeslamming Mankind.

One of the faces of Foley tried to fight back with a swinging neckbreaker, but the Rock came in to break the pin. Steve Austin then attacked the Rock, leading to Mankind delivering a spinebuster, followed by the Corporate Elbow for two. Austin then tried to hit Undertaker with a stunner for the win, but Undertaker’s disciples Big Bossman and Ken Shamrock came in and attacked the babyfaces, ending the match in disqualification.

After the bout, Bossman handcuffs Mankind to the top rope while Undertaker punished Austin. He then carried The Rattlesnake to the ramp and tied him to a huge cross, which looked almost similar to The Phenom’s symbol. Stone Cold Steve Austin, however, took his revenge at the Rock Bottom 1998 PPV, where he defeated Undertaker in a Buried Alive match.

WE RECOMMEND
Stone Cold Steve Austin documentary could be NEXT BIG project for The Last Dance producers
The Undertaker: Indian artist pays homage to The Phenom with INCREDIBLE rangoli art
Undertaker’s $1,000 cameo videos leaked after he announced his retirement on Sunday
The Undertaker farewell: Calaway bids goodbye with a heartfelt speech at Survivor Series
Undertaker teams up with Omaze to prank fans as he enjoys retirement: Watch