Controversial streamer Leafy has been banned from streaming on Twitch after his continuous banter with the platform's flagship streamer, Pokimane.

Twitch, in the past few months, has emerged as the platform which does not shy away from banning its prominent members if they do not respect the community guideline. While it was Dr DisRespect's Twitch ban which had made the headlines previously, the platform has now permanently banned the controversial former YouTuber Leafy from streaming on Twitch. Fans of LEafy have now taken to Pokimane and balming her for the creator's sudden ban from the platform, but it was not so sudden actually.

As of now, Twitch has not confirmed or denied whether Leafy has been permanently banned from streaming on its platform but it as issued a statement to the Kotaku portal, which is identical to the statement provided during Dr DisRespect's ban. The platform states that it reserves the right to suspend any account which they deem inappropriate or violates the community guidelines. However, Leafy's ban on Twitch only sounds justifiable cause the controversial streamer/ content creator was recently banned from YouTube in August 2020. But does Leafy's ban has anything to do with Pokimane? It is not so simple to answer.

Leafy, in the past few months, has somewhat been click-baiting his viewers by using Pokimane in his titles or thumbnails which was considered to be online targetting by many from the Pokimane army. On August 9, 2020, Leafy went to the limits of exposing that Pokimane has a boyfriend and that she keeps that part of her life hidden from the world in order to continue manipulating her audience which is predominantly male. This sparked another controversy between the two content creators and Pokimane ended up making an apology video where she addressed the claims made by Leafy stating that she has a right to privacy. Check out her video below -

While Pokimane has been the flagship streamer on Twitch, allowing the platform to amass millions of viewers monthly, Leafy, on the other hand, has been the sour grape, not just for Twitch but also for YouTube. Leafy's content is considered to be edgy by many viewers but some also view it to be cyberbullying and harassing people online. However, the ban on leafy has now ultimately kicked off an online argument whether the controversial streamer should have been removed from the platform. While some have also shown vocal support towards bringing the streamer back on the platform. 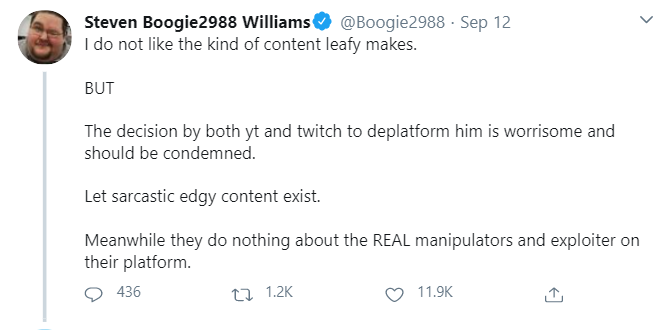 Also read: What happened to Fedmyster? What did he do to Yvonne & Pokimane?

WE RECOMMEND
1 week ago
Ninja back on Twitch; makes it back home with a multiyear contract
2 weeks ago
New Zealand PM Jacinda Ardern wins internet with surprise Twitch cameo
1 week ago
Pokimane announces her return to Twitch after taking a 'burnout' break; See
4 weeks ago
Why was LeafyIsHere banned from YouTube? Read to know more
2 weeks ago
Fall Guys Fridays Twitch Rivals live stream: How to watch $50k event, schedule and prizes