Spidercat for the Spider-Man: Miles Morales game has been revealed on the internet and the feline friend can also assist in finisher moves.

Sony and Insomniac Games enjoyed massive success with Marvel's Spider-Man back in 2018 and a sequel to the game set one year after events of the first game was announced later on. A trailer for the same was launched during he PS5 announcement event and the game will feature Miles Morales picking up the mantle of Spider-Man instead of Peter Parker. The trailer of the game showcased Miles Morales finding his neighbourhood of Harlem b being subjected to a damaging battle between an energy corporation and a criminal army. Thus, it means that the game will feature an array of villains which Miles will have to face throughout the runtime. However, it looks like Miles Morales will not be alone in the battle with villains as he will be assisted by 'Spider-Cat'. Check it out below - 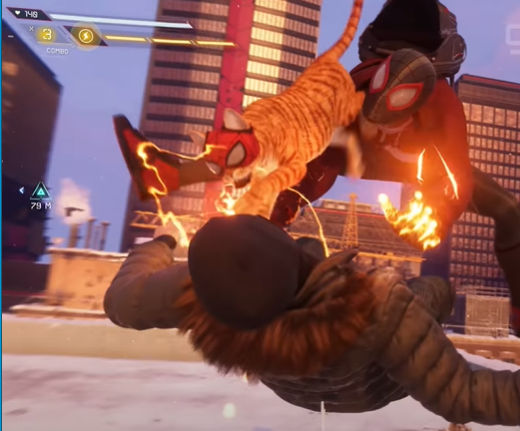 The bodega cat in the name is named 'Spider-Man' and is similar looking to the Goose cat from Captain Marvel. Miles first rescues the cat after it goes missing, however, the exact reason behind it going missing is not revealed. Later on, Miles hands the cat to its owner. Later on, the kitty can be seen donning a Spider-Man mask and finds itself comfortable in Miles' backpack. The cat also assists Miles Morales in battle by showing some finishing moves.

Also read: FIFA 21 TOTW 3 Predictions: Best Players Who Might Make It To The Team Of The Week

Marvel's Spider-Man: Miles Morales is not far away now as the game is set to launch on November 12, 2020, on the PS4 and PS5. The game can also be played on 4K 60 FPS which is called as the 'performance mode' or in 4K 30 FPS coupled with ray tracing for PS5 players only. The Spider-Man: Miles Morales game is all set to be a launch title for the PS5 along with others like the Demon's Soul PS5 remake.

WE RECOMMEND
1 month ago
Is Demon Souls coming to PC? Check details about the 2009's remake game
4 months ago
Spider Man Miles Morales on PS5: When does the new PlayStation game come out?
2 weeks ago
'Spider Man 3' star Tom Holland had already hinted at a team-up with Dr Strange in 2019
1 month ago
Spider Man Miles Morales: Game size, Pre-order and other details
4 weeks ago
Ben Jordan recast as Peter Parker in Marvel's Spider-Man PS5 remastered edition