What time is the Fortnite Daredevil cup? has been a question for many fans. Read below to know about the upcoming 4-part tournament in Fortnite.

While the fans of the Marvel Cinematic Universe have been anticipating the entry of Daredevil alongside iconic characters Groot and Ironman, Fortnite has gone a mile ahead and already made a crossover. The Daredevil skin introduced by Fortnite stands true to the comic book counterpart, with a bright red outfit. The official website of the game recently announced that the Daredevil Cup will be taking place soon through a blog post. Check out excerpts from it below -

A new Marvel Hero comes to Fortnite — setting off a competition on the Island like never before.

The first cup celebrates the Man Without Fear himself, Daredevil. Winners will get ultimate bragging rights — early access to the Daredevil Outfit before the Item Shop release!

Also read: Fortnite dynamic shuffle emote: Know all about origin and other emotes 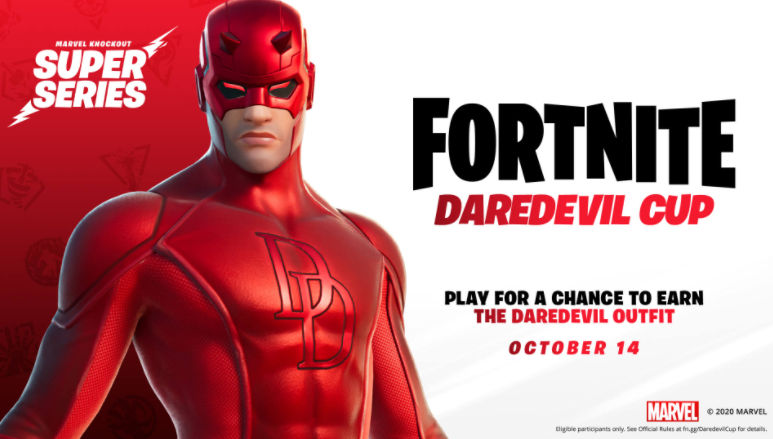 When does Fortnite Daredevil cup kick-off?

Fortnite's ongoing collaboration with Marvel has brought upon an opportunity for fans to get their hands on the Daredevil skin for free. The Daredevil Cup will be starting on October 14, 2020, though as of now, Epic has not announced at what time the competition will commence. Winning a Daredevil skin is not an easy task as teams need to reach to a top-level in their specific region, however, it will be a free skin and players competing will not have to shell out their V-Bucks for the same.

The real prize of the competition is $1 million which will be announced after four cups. Since the first cup has been named the 'Daredevil Cup' it only implies that the future competitions in the final tournament will be named after different characters. Perhaps the four cups could be named for the four Defenders like Iron Fist, Luke Cage, Daredevil, and Jessica Jones, but there has been no confirmation about the same yet.