There were speculations about Xbox launching a cheaper version of their next-generation console. The company has confirmed the same by unveiling the Xbox Series S console which the company has deemed to be 'smallest Xbox ever'. This console has been priced at a reasonable $299 and is all set to debut on  November 2020. Check it out below - 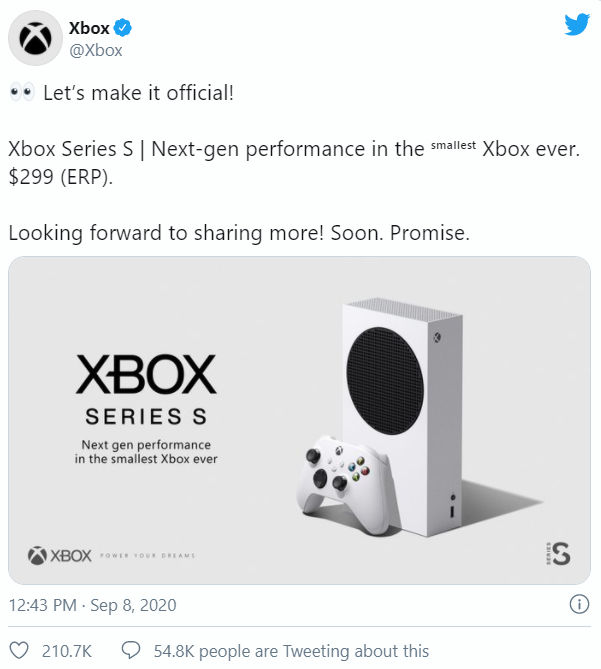 Also read: Xbox Series X exclusive games to launch with the console from 'Scorn' to 'Tetris'

Leaks around the next-generation Xbox had revealed that the Series X console would cost $499, with a discounted price of $199, it can be deemed that gamers will gravitate towards he heaper Xbox Series S. While the console itself is cheaper and does not have a disc drive, users might think of it to be inferior to the Xbox Series X, however, the CD drive is the only differentiator between the two consoles. Xbox Series S, while being cheaper, is also the next-gen console which has been given an all-digital version.

Since the console is cheaper, it will have some backdrops as compared to the flagship Xbox Series X. The Series S console is expected to come with onboard storage of only 512 GB via a solid-state drive. This will be lesser that Series X which is expected to boast 1TB storage along with another 1TB extension via a port. To make up for the limited storage, Microsoft is expected to include a similar expansion port from the Xbox Series X console.

On the other hand, Xbox Series S will miss out on having a 4K UHD Blue-ray disc drive which will come along with the flagship console but it will support games at high frame rates and has been designed to smoothly run the newer games. Series S can run games at 1440P up to 120 frames per second. The console supports the same physical light rendering technology by the flagship Series X. It will also be able to easily stream content like Netflix and others in 4K HDR. Similarly, the console can real-time upscale 1080P and 1440P games in 4K for the current smart televisions. In conclusion, the Xbox Series S is as premium as the larger Series X console but without a disc drive and the extra storage.