Responding on Democratic presidential front-runner US Senator Bernie Sanders reaction to the Delhi riots, BJP's General Secretary BL Santhosh has threatened to play a role in Presidential elections. However, he deleted the tweet later. Sander had slammed US President Donald Trump's response to violence in north-east Delhi, during his visit.

Taking to Twitter, Sanders had termed it as a "failure of leadership on human rights" and called the riots in Delhi as "anti-Muslim''. Donald Trump was on his maiden visit to India on February 24 and 25 and riots broke in the national capital on the night of Februray 23. Responding to it, Santhosh wrote: "How much ever neutral we wish to be you compel us to play a role in Presidential elections. Sorry to say so... But you are compelling us." He later deleted the tweet.

Sanders had written: "Over 200 million Muslims call India home. Widespread anti-Muslim mob violence has killed at least 27 and injured many more. Trump responds by saying, "That's up to India." This is a failure of leadership on human rights." 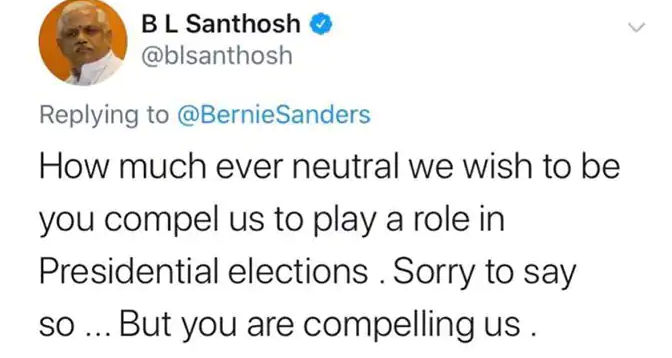 During his India visit, while addressing a press conference in New Delhi, Donald Trump in response to a media query said that he had heard about violence but did not discuss it with Prime Minister Modi during their talks as it is "up to India" to deal with it. Trump also appreciated Prime Minister Narendra Modi's efforts to ensure religious freedom in the country.

"As far as an individual attack is concerned, I heard about it but I didn't discuss (with PM Modi). That's up to India. And I will say the Prime Minister was incredible on what he told me. He wants people to have religious freedom, and very strongly said that in India they have worked very hard to have great and open religious freedom," Trump said in the press conference.