In a tweet, Trump claimed that Facebook chief Mark Zuckerberg had stated that he is "Number 1" on the platform followed by PM Narendra Modi, which is untrue.

US President Donald Trump made a claim on Twitter that quickly drew the attention of users and was called out for being false. In a tweet on Saturday, Trump claimed that Facebook founder and chief Mark Zuckerberg had stated that he is "Number 1" on the platform followed by PM Narendra Modi. The statement of Zuckerberg quoted by Trump couldn't be found on the internet.

Great honor, I think? Mark Zuckerberg recently stated that “Donald J. Trump is Number 1 on Facebook. Number 2 is Prime Minister Modi of India.” Actually, I am going to India in two weeks. Looking forward to it!

Honestly, to be number one on Facebook, Trump would have to beat Narendra Modi's 4.4 crore followers by nearly doubling his followership. The US President currently has 2.7 crore users following him on the platform. In an interview to a US TV news network last month on the sidelines of the World Economic Forum in Davos, Trump had said, “I’m Number 1 on Facebook, you know who’s number 2? Modi from India.“

Even more interesting is that their respective followership can be counted as number 1 and number 2 only in the category of political leaders. 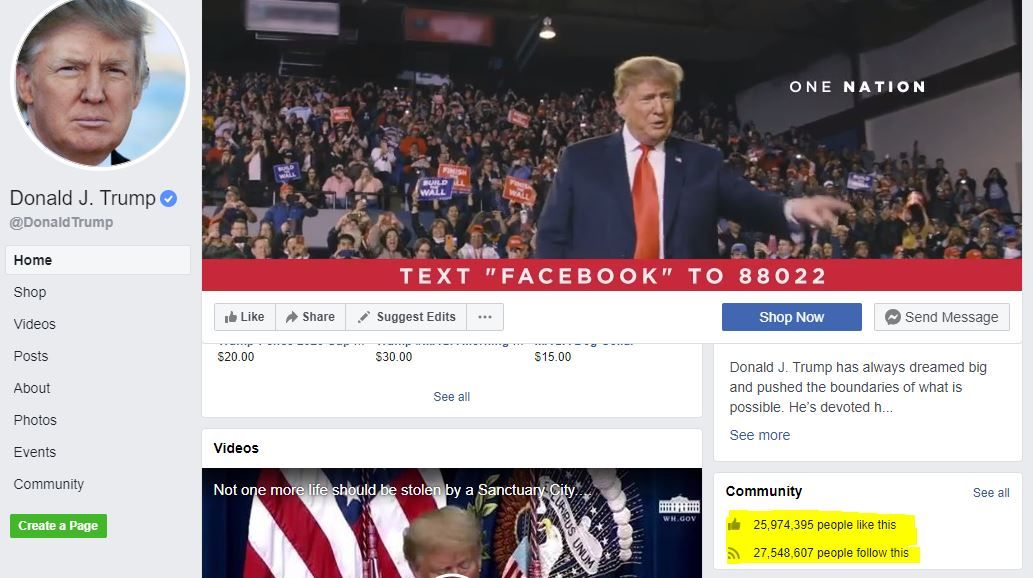 According to the data tracking website – statista.com – the most followed personality on Facebook is Portuguese football player Christiano Ronaldo with over 12 crore followers, followed by Colombian pop singer and dancer Shakira with 10 crore followers. Other figures like Vin Diesel, Justin Beiber and Leonel Messi are way ahead of PM Modi and President Trump in the followership race.

READ | EAM Shuts Down US 'concerns' On J&K Issue: 'One Democracy Will End It, You Know Which'

Donald Trump's tweet came just weeks before he is scheduled to land in India for a two-day state visit with his wife Melania Trump. The President and the First Lady will be here on February 24-25. According to the Ministry of External Affairs (MEA), Donald Trump is expected to attend an event at the Motera Stadium in Ahmedabad similar to the 'Howdy Modi!' function that was addressed by Trump and Modi in Houston in September last year. The US President is also scheduled to visit the Taj Mahal along with Melania Trump.