Arjun Kapoor was last seen in Ashutosh Gowarikar’s 'Panipat'. The actor recently took to social media to reveal that he got hurt during shoot. Read on.

Arjun Kapoor was last seen in Ashutosh Gowarikar’s Panipat alongside Kriti Sanon and Sanjay Dutt. The film reportedly failed to work its charm at the box-office. However, the actor has now moved on and is currently shooting for his upcoming film.

Arjun Kapoor gets hurt during the shooting

Arjun Kapoor recently took to social media to share a piece of news with his fans. He told his fans in the latest social media update that he has suffered  an injury. Arjun Kapoor even captioned the picture as “Basic injuries while u shoot a simple family comedy”.

In the picture that Arjun Kapoor has shared, we can see a glimpse of his feet that got band-aided. However, from the picture, it is still unclear as to what happened. There has been no further information about the same as to how did the injury happen. 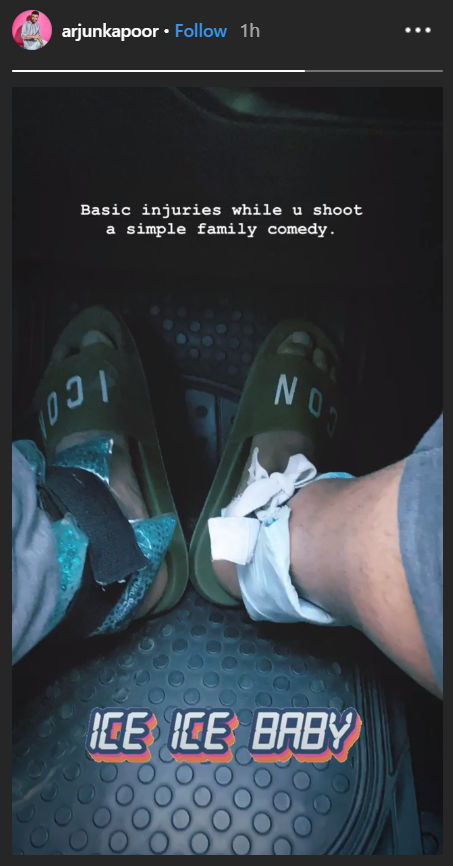 Arjun Kapoor has an interesting year ahead of him on a professional front. He will be kickstarting the year with Dibakar Banerjee’s Sandeep Aur Pinky Faraar opposite Parineeeti Chopra. The team recently wrapped up the shoot of the film.

In addition to this, he will also be seen opposite Rakul Preet Singh in another film. The yet-untitled project is being directed by Kaashvi Nair. The film will also star The Last Color actor Neena Gupta.

Arjun Kapoor, reportedly, has been dating Bollywood’s glam queen Malaika Arora for quite some time. According to reports, the two also went out on a vacation together. While they have kept their status together in hiding for a long time, now the couple has uploaded a few pictures with each other on their social media handles.