In his Instagram post, model-turned-actor Milind Soman shared a picture from his Captain Vyom days, along with an earthy and planetary caption.

In his post, Milind shared a picture from his acting stint in the DD national television series Captain Vyom. Along with the picture, he wrote a long caption that the fans of Captain Vyom will definitely find joy in. He wrote, “#Throwback Thursday 2597!! a lot of people will guess where this pic was taken somewhere between the 4th and 5th moons of the planet Zuwar, on an Asteroid just big enough to maintain its own orbit, there was a small hut, built from the wooden debris of one of the old factories on Earth, dating from the ancient age of industry. The twin red suns of Zuwar kept it warm. It wasn't much, but it was a place to be happy.” The caption was followed with the hashtag #CaptainVyom. In the picture, a younger Milind Soman is smiling at the camera while wearing his superhero costume.

As soon as Milind Soman’s Instagram picture dropped, all his fans and followers started commenting on how Captain Vyom was their favourite childhood superhero. One user said, “Probably the best designed fictional suit in an Indian show. This show was Lightyears ahead of its time” while another one thanked Milind Soman for making their childhood awesome. Several other fans showed their love for the show by posting various emojis in the comment section.

Check out the comments on Milind Soman’s photos here 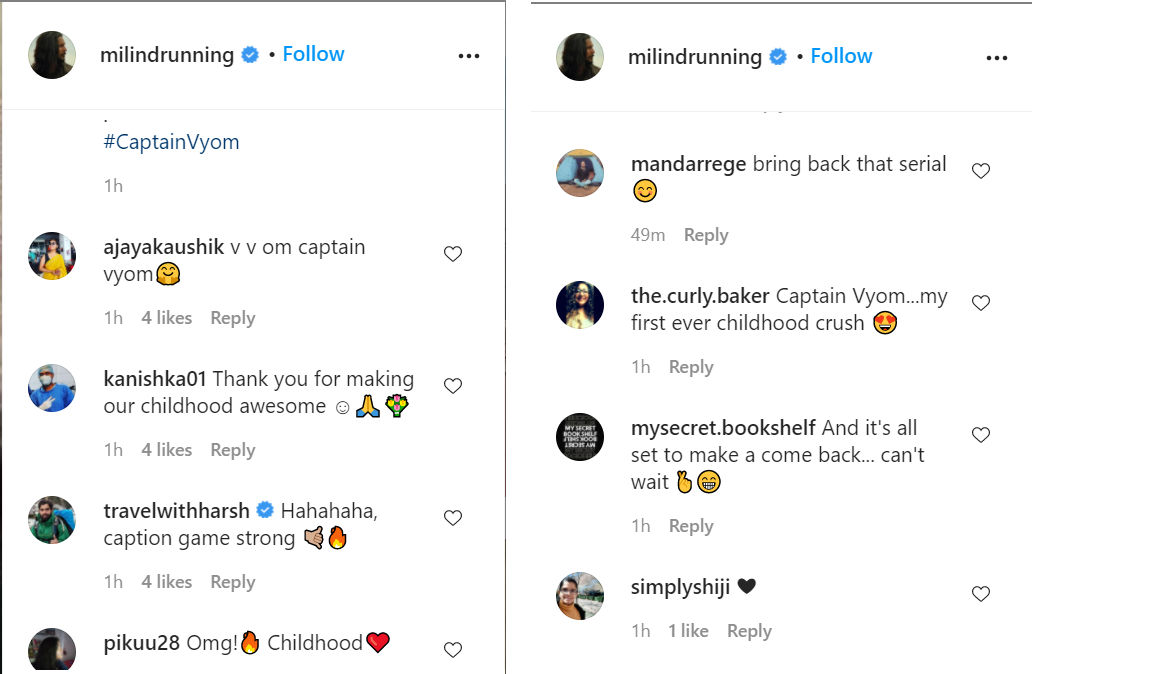 Here are some more of Milind Soman's throwback pics

Along with being a celebrated supermodel, Milind Soman is an athlete and a fitness promoter. In 2015, Milind completed the Ironman Challenge in 15 hours and 19 minutes that too on his first try. On his Instagram page, we can often see Milind Soman's photos which promotes exercise and living a healthy and fit life.