Bollywood actor Nushrat Bharucha has a hilarious response for a Twitter fan who asked for her hand in marriage. Read on to know her reply to the proposal

Bollywood actor, Nushrat Bharucha celebrated her birthday on Sunday, May 17, 2020. However, it seemed to be a real intimate affair with the nationwide Coronavirus lockdown and social distancing rules. With the lack of other birthday activities, the actor hosted a #AskNushrat session on Twitter where a fan proposed her for marriage. Here's what Nushrat had to say.

On Nushrat Bharucha's Twitter, a fan asked her hand in marriage during the #AskNushrat session. She replied back saying she was lucky her mother was not on Twitter chat. Check out the tweets: 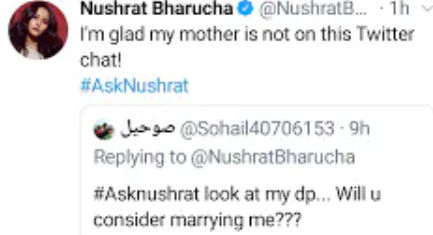 It seems actor Nushrat Bharucha is all ready to settle down. Strengthening this notion is her reply to another fan's question who asked her what did she yet have to achieve. Take a look at Nushrat's reply:

To find that perfect someone to spend the rest of my life with, who I can build a family with & call my own.#AskNushrat https://t.co/LfyiyOD4od

Also Read: Nushrat Bharucha's Pics With Her Girl Gang Will Drive Away Your Monday Blues

Here's how Bollywood stars wished Nushrat Bharucha on her birthday

Happy birthday to you @NushratBharucha wish you a super year ahead :)

Happy birthday â¦@NushratBharuchaâ© You are one of the nicest, sweetest, most genuine people I’ve met in a while in this industry. Wish you all the happiness and success in the world! Keep rocking Sonu ke Titu ki Sweety! ðŸ¤— pic.twitter.com/ZZYeSZdYxW

Nushrat Bharucha has been linked to Kartik Aaryan with whom she had worked in four movies namely, Pyaar Ka Punchnama, Akaash Vani, Pyaar Ka Punchanama and Sonu Ke Titu Ki Sweety. Before the success of the latter, the two were even spotted spending time together. But neither of them ever confirmed these rumours and maintained they were just good friends.

Link-up rumours of Nushrat Bharucha with Sonu Ke Titu Ki Sweety director Luv Ranjan have been doing the rounds for quite sometime It was also reported that sparks between the actor and her director started flying on the sets of Pyaar Ka Punchnama 2. However, Nushrat had denied these rumours as well.

Also Read: Nushrat Bharucha Was Rumoured To Be Dating These Popular Bollywood Personalities

Nushrat Bharucha was last seen in the movie Dream Girl which released in 2019. The movie also starred Ayushmann Khurrana and was a big hit at the box office. She is currently gearing up for two films, Chhalaang which stars Rajkummar Rao. She is also set to star in Hurdang with Sunny Kaushal.

Also Read: Nushrat Bharucha Opens Up About Her Battle With Depression

PEOPLE HAVE PLEDGED SO FAR
LATEST NEWS
View all
2 hours ago
'Koki presents Sasti Monjulika': Kartik Aaryan's latest episode features his sister; Watch
4 hours ago
When Abhishek Bachchan, Aishwarya Rai opened up about their marriage on a chat show
3 hours ago
Katrina Kaif and Ranveer Singh to team up for Zoya Akhtar's next untitled film
3 hours ago
Remember when Akshay Kumar said that mother-in-law Dimple Kapadia is his best friend?
5 hours ago
Kids give tribute to Sonu Sood with 'Ae Watan' song & 19 film-titles speech, actor reacts