Actor Richa Chadha took to Instagram to congratulate Kalki Koechlin on the birth of her daughter Sappho with boyfriend Guy Hershberg. Here is what she said

Kalki Koechlin was recently blessed with a baby and was seen sharing her happiness with her fans on Instagram. The Zindagi Na Milegi Dobara actor, who had been regularly posting about her pregnancy, announced the birth of her daughter with her boyfriend Guy Hershberg a few days back. Recently, Kalki's friend and co-star Richa Chadha congratulated her in a heart-warming post on Instagram.

Richa Chadha shared a picture of herself along with Kalki on her Instagram handle. The two can be seen sitting on a bed as Richa is looking at Kalki and the latter is cutely pouting for the camera.

Richa, in the caption, first congratulated Kalki then shared a conversation that she had with Kalki few years ago. She wrote that Kalki had asked that if all the compassionate and intelligent people choose to stop having kids, what will happen to the world? Richa then added that she loves her and is happy for Kalki and Guy. Richa also sent her blessings to Kalki.

Kalki also commented on Richa's touching post. Kalki sent her love to Richa and called her a compassionate and intelligent girl. 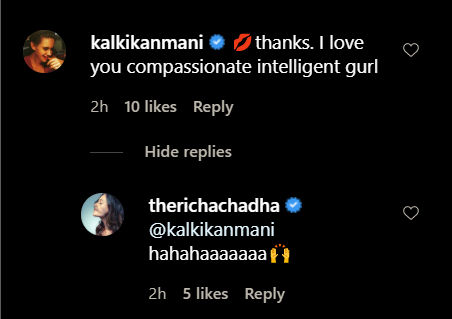 Kalki had shared three beautiful pictures of herself and Guy with their daughter Sappho. The actor took pictures with the nurses who helped with her delivery and also her doctors. She called them 'miracle workers'. She shared how she had given up after 17 hours of struggle but the nurses and doctors helped her through a natural waterbirth.