Tara Sutaria posted a picture on her Instagram story of a buttercream and white chocolate cake that she has baked during the lockdown. Read on to know more.

The global outbreak of COVID-19 has forced people to stay inside their homes in quarantine as the governments have ordered a nation-wide lockdown. People are finding new ways to keep themselves entertained during such a time as well as the Bollywood celebrities. Recently, the new actor on the block, Tara Sutaria seems to be brushing up her baking skills, details of which she shared on Instagram.

Tara Sutaria bakes while in quarantine

Tara Sutaria on Instagram posted a story letting her fans know what she is up to during the nation-wide lockdown. Apparently, the Marjaavaan actor seems to be busy honing her baking skills. She posted a picture of a cake with the caption "Baked my fav buttercream and white chocolate cake". 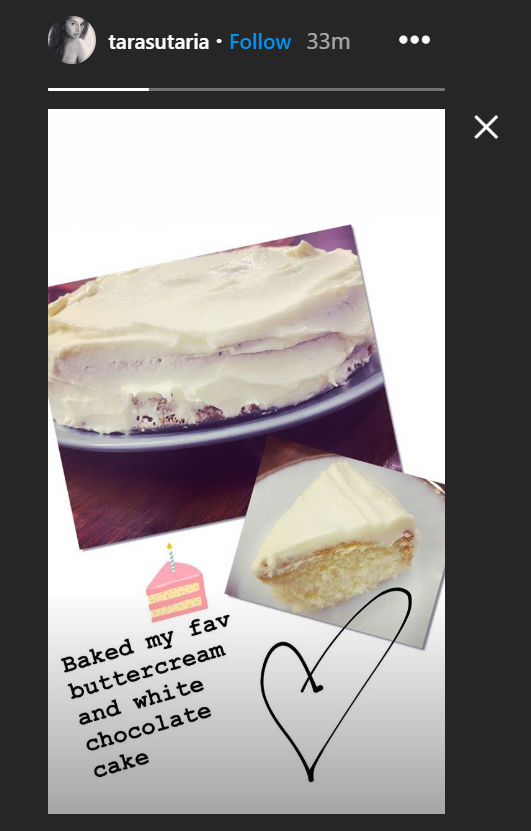 Despite having an envious figure, Tara Sutaria seems to be quite the food. In several of Tara Sutaria's photos, the actor has posted pictures of food which might indicate that she is a foodie. Take a look:

Tara Sutaria is just two-films-old in Bollywood. She made her debut with Student of the Year 2 after which she starred in Milap Zaveri's Marjaavaan. She next has Ek Villain 2 lined up in her kitty which also stars Aditya Roy Kapoor and John Abraham. Besides this, she will also be seen in Jhagdaloo and a yet-untitled remake of the Hollywood movie, Step Up.