Here is an entertainment recap of September 10, 2020. Some of the news pieces include Kangana Ranaut's office visit, Rhea Chakraborty's arrest, & more.

Today was an eventful day for the Bollywood industry. Here is an entertainment recap of September 10, 2020. Some of the news pieces include Kangana Ranaut's office visit, Sushant Singh Rajput's case updates, Rhea Chakraborty's arrest, & more.

According to a report by Republic World, ace designer Manish Malhotra has received a show-cause notice. The notice was issued since Malhotra illegally used a residential property as a commercial space. Bollywood actor Kangana Ranaut was asked to respond to such notice within 24 hours, Manish Malhotra has been given a leeway of 1 week. This has stirred up a lot of controversies.

According to a report by Republic World, Rhea Chakraborty is now in a separate prison cell room near general barracks on the ground floor of the Byculla prison. Rhea’s prison cell is reportedly similar to Indrani Mukerjea’s cell. Indrani Mukerjea was the prime accused in the Sheena Bora murder case.

Recently, veteran actor Amitabh Bachchan took to Instagram to share a behind the scenes moment from the Kaun Banega Crorepati shoot. The photograph also featured KBC’s crew members. Amitabh captioned the post as, “... be safe .. be in precaution .. work continues as must it should ..ðŸ™”. You can check out Amitabh Bachchan's KBC post here:

ALSO READ: Amitabh Bachchan Says 'work Continues As It Should' As He Shares A BTS Pic From 'KBC' Sets

According to a recent report by Republic World, a 19-year-old patient in Kerala was sexually assaulted by her ambulance driver. The patient was reportedly suffering from the COVID-19 virus. Recently Bollywood actor Bhumi Pednekar took to Instagram to express her opinion about the same. You can check out her Instagram story here: 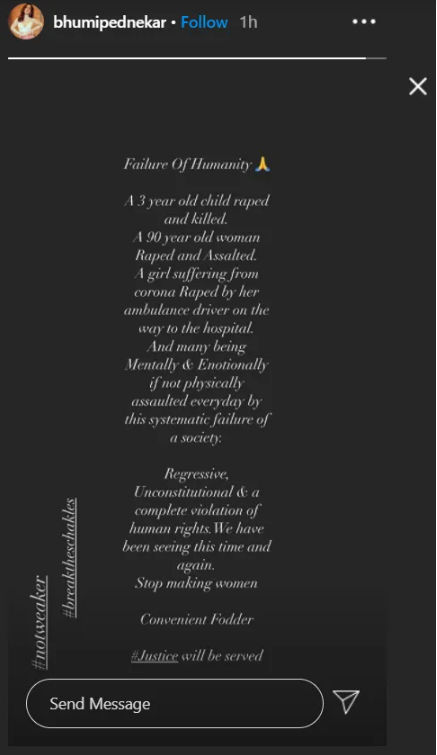 Kangana Ranaut’s Bandra office was recently demolished by the BMC. According to a recent report by Republic World, Kangana visited her Bandra office today. Further, she was also accompanied by her sister, Rangoli Chandel.