Bryan Adams recently went on a bizarre and unusual rant about the coronavirus pandemic where he used expletives and racist terms. Check it out -

Canadian singer-musician Bryan Adams recently went on a rant on Instagram where he expressed some controversial views. The singer posted a video on his Instagram where he shared that he was scheduled to go for a number of tours staring from May 2020 but could not do so as 'bat eating' people in the wet animal market put the lives of millions of people in danger.

Bryan Adams was referencing to the conspiracy theories that the ongoing coronavirus pandemic has occurred as people in the city of Wuhan in China were eating bats. In the post, Bryan Adams also advocated the need to go vegan and not consume animals.

Also read: Emma Watson "crossed All Limits As An Actress" In THIS Scene: 'Harry Potter 7' Director 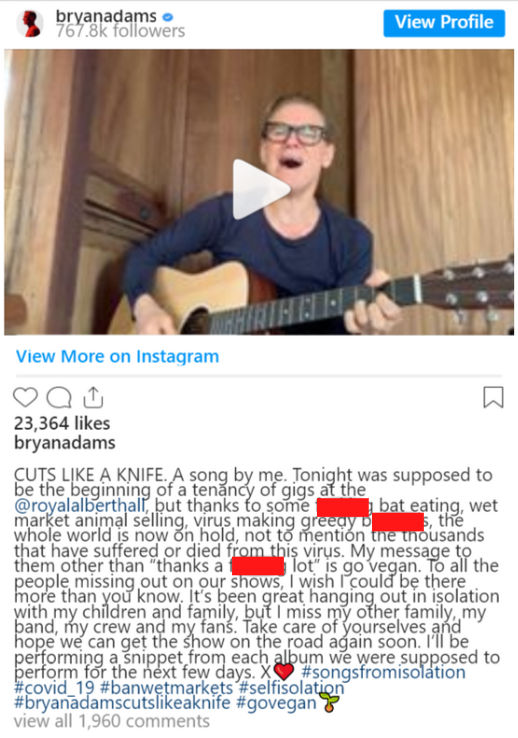 Bryan Adams posted a video where he could be seen performing his 1983 superhit song Cuts Like a Knife. The singer has promised that he will be performing songs he was supposed to sing during the tour in the course of the next few days. Bryan Adams also shared a tweet on Twitter along with the same caption but quickly deleted it as deemed as racists by internet users.

Bryan also disabled the comments of his Instagram post where he was receiving a lot of backlash for the insensitive comments made by him. Many Twitter users then shared a screenshot of Bryan Adams' tweet while sharing that the singer's words extremely racist.

Whereas, advocating veganism while slamming a certain group of people was also deemed as insensitive by many internet users. Many netizens were quick to share that they won't be listening to Bryan Adams' music anymore due to his insensitive ideologies. Check out netizens reaction below -

I have to admit that I never thought I'd be saying the words "Bryan Adams is a racist conspiracy theorist", but these these times are showing some people for who they really are.

I won't be listening to his music anymore.

As a vegan, I just wanna say we don't claim @bryanadams and his xenophobia, or anyone that's cool with what he said.

PEOPLE HAVE PLEDGED SO FAR
LATEST NEWS
View all
19 hours ago
With a gay protagonist, Pixar short ‘Out’ makes history
16 hours ago
Malaika Arora’s unforgettable pictures from her old modeling days
20 hours ago
Chernobyl' director Johan Renck in talks to adapt novel 'The Magus'
17 hours ago
Pulkit Samrat gives a cheesy crown to his "queen" Kriti Kharbanda; Read details
15 hours ago
Tom Hanks' baseball uniform from 'A League Of Their Own' up for auction, bid crosses $4000