Emma Watson Aka Hermione Granger Has Buck-teeth Only In One Harry Potter Scene, Here's Why

Hermione Granger aka Emma Watson has buck-teeth in only one scene reveals the director of 'Harry Potter and the Philosopher's Stone'. Read on to know more

While adapting Harry Potter novels onto the screen, the directors made many changes and rightly so. However, one thing that stood out in stark difference from the book, was that Hermione Granger's character was supposed to have buck-teeth whereas Emma Watson didn't. Although the makers tried to incorporate it at first, very soon it became evident, this would not do.

Why Hermione Granger does not have buck-teeth in the Harry Potter movies?

In the Harry Potter books, it has been mentioned throughout the first three series that Hermione Granger had buck-teeth, meaning her front two teeth were larger. The makers of Harry Potter and the Philosopher Stone did try to incorporate it at first making Emma Watson wear prosthetic teeth. However, very soon they found out they would have to leave out this detail from Hermione Granger's look.

Also Read: Emma Watson "crossed All Limits As An Actress" In THIS Scene: 'Harry Potter 7' Director

The first scene that was shot on the sets of Harry Potter and The Philosopher's Stone was the final train scene. In it, Hermione Granger aka Emma Watson could be seen wearing the prosthetic teeth, but she had trouble speaking. Director, Chris Columbus told an entertainment portal that he realised Emma would not be able to perform throughout the movie with the fake teeth. So it was ruled out from Hermione's movie appearance, but the scene was, however, not changed. 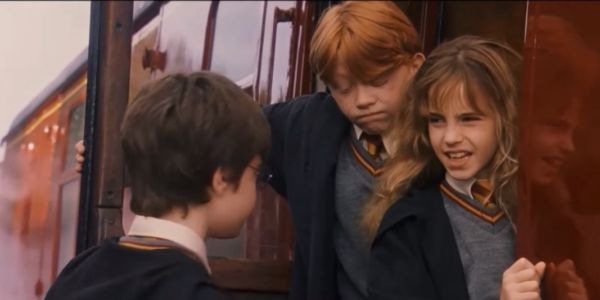 Image: Still from Harry Potter and The Sorcerer's Stone

Not many would even notice Emma Watson's fake teeth in the scene simply because she had a brief line to deliver. In the Harry Potter book series, however, Hermione Granger has buck-teeth until Harry Potter and the Goblet of Fire.

Also Read: National Unicorn Day | 5 Harry Potter Trivia About Unicorn We Bet You Did Not Know

PEOPLE HAVE PLEDGED SO FAR
LATEST NEWS
View all
2 hours ago
Kylie Jenner becomes 'World's highest paid celebrity' after Forbes' 'billionaire' claim
4 hours ago
When Liam Hemsworth appeared in movie sequels: Check full list
33 mins ago
Matt Damon & family travel back to California after being stranded in Ireland for 2 months
3 hours ago
Angelina Jolie donates $200,000 to NAACP Legal Defense fund as protests storm US: Reports
1 hour ago
Hera Pheri Quiz: Find out which 'Hera Pheri' character you are, Baburao, Shyam or Raju?